What to Buy the Shadowhunter Who Has Everything

What to Buy the Shadowhunter Who Has Everything (And Who You're Not Officially Dating Anyway) is the eighth released short story in The Bane Chronicles.

Magnus Bane may or may not be dating Alec Lightwood, but he definitely needs to find him the perfect birthday present.

Set in the time between City of Ashes and City of Glass, warlock Magnus Bane is determined to find the best birthday present possible for Alec Lightwood, the Shadowhunter he may or may not be dating. And he's also got to deal with the demon he's conjured up for a very irritating client...

Magnus Bane has a problem, because he cannot think of a perfect birthday gift for Alec Lightwood. Also, to make things worse, he has an irritating client to satisfy. Caroline Connor, aforementioned irritating client, wants Magnus to raise a demon.

After summoning a demon named Elyaas, Magnus calls his two friends Catarina Loss and Ragnor Fell. Magnus asks them for advice regarding Alec's birthday present. Catarina simply hangs up on him, while Ragnor makes an excuse that he was going under a tunnel and hangs up as well.

Feeling let down, Magnus thinks about the night he took Alec to Taki's. Magnus suddenly realizes what the perfect gift for Alec might be, but has no idea how to give it to him. Magnus's doorbell suddenly rings, and Magnus answers it to find Isabelle Lightwood standing in front of him. Isabelle tells Magnus that she is alright with Alec dating Magnus. Magnus realizes what Alec's gift should be. Magnus takes Isabelle's whip and casts a spell on it so that it would never fail her when she needs it.

After Isabelle leaves, Ms. Connor rings the buzzer and walks into Magnus's loft. She tells Elyaas what she needed him to do, which was curse several mermaids, something Magnus could have easily done himself. Ms. Connor agrees that Magnus could solve the problem and leaves. Elyaas starts to taunt Magnus about his father, and Magnus banishes him. Magnus's phone rings, and he sees that it is Alec. They converse for a bit, then Magnus lets Alec into his apartment. They kiss, and Magnus wishes Alec happy birthday. 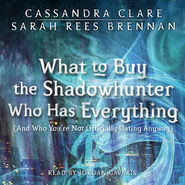