What Really Happened in Peru is the first released short story in The Bane Chronicles.

Fans of The Mortal Instruments and The Infernal Devices know that Magnus Bane is banned from Peru—and now they can find out why.

There are good reasons Peru is off-limits to Magnus Bane. Follow Magnus's Peruvian escapades as he drags his fellow warlocks Ragnor Fell and Catarina Loss into trouble, learns several instruments (which he plays shockingly), dances (which he does shockingly), and disgraces his host nation by doing something unspeakable to the Nazca Lines.

Magnus Bane wakes up in his roadside inn just outside of Lima, the capital of Peru. He then goes to see his warlock friend, Ragnor Fell, in the common room. They order 5 drinks for Ragnor and 17 for Magnus. Magnus then takes Ragnor on a tour of Lima, from the facade of the archbishop's palace to the brightly colored buildings across the plaza. They then visit Lake Yarinaco and see all the sights of Peru, including Magnus's favorite city of Arequipa. They are then guided by a young woman, Guiliana, who knows her way in the Manu rain forest and leads them to ayahuasca. Magnus is then chased by a dominant male spider monkey in the rain forest and narrowly escapes. Magnus later brings Ragnor with him when he is hired by a rich Peruvian merchant, who needs help with sending out and guarding one of his largest cargo ships filled with guano. While on the ship, he and Ragnor end up waist deep in bird droppings because of Magnus's recklessness. Ragnor later sinks the cargo boat, but this is not, however, the reason Magnus was banned from Peru.

The next time Magnus is back in Peru, he is on a job with his friends Catarina Loss and Ragnor Fell, despite the fact that Ragnor had promised never to return to Peru in Magnus's company. They are walking into the valley of the Lurin River with their client, Nayaraq. When reaching the Pachcamac pyramids, Magnus, to impress their client, claims that he knew the oracle who lived there 700 years ago. What Nayaraq wants is the treasure that her great-great-grandmother had hidden when the conquerors had come. But it turns out that Nayaraq has not been searching for gold but for something real in her past—as opposed to the life of illusion and glamour she had when she was taken by faeries. They later hear that they are criminals wanted for desecrating a temple, but nevertheless, this is not the reason that Magnus was banned from Peru. After their adventure, Catarina Loss reveals that she was jealous of Magnus's and Ragnor's adventures in Peru, from the century before. She then proposes that all three of them stay in Peru for while; both Magnus and Ragnor agree.

Five years later, Magnus decides to learn to play a new musical instrument, a charango, which he fails at. He is forbidden to play the charango in the house, and even cats run away from him. Some civilians mistake his playing for the sounds of a dying sea monster. He witnesses a llama stampede when he goes up to the mountains and plays there. During the time in Puno, Magnus meets Imasu Morales, a talented musician. Magnus develops feelings for him, as he is very attractive. After many more failures with the charango, Magnus decides to give up music. The next day, all of the Puno rise and gather together in a festival, there Magnus and Imasu share their stories of their childhoods. They later part. Magnus then switches to traditional dancing, which he is pretty good at (when using magic). Magnus wakes up later in Nazca, wondering what happened, and Catarina tells the story of how he, under the influence of alcohol, broke into a man's house and stole a carpet and enchanted it to fly. She also tells how he then sped off into the night air, and her and Ragnor pursued him on foot through a mammoth desert. According to her, he told them to leave him in the desert, because he planned to start a new life as a cactus, then he conjured up tiny needles and threw them at Catarina and Ragnor with pinpoint accuracy. He tried to fly to Moquegua, but he never got there.

He then gave Catarina and Ragnor a dish called cuy while trying to flirt with his own plate. When Ragnor discovers that cuy is cooked from guinea pigs he takes Magnus's plate and smashes it to pieces on the intoxicated warlock's head, thus ending their love. Magnus then collapsed on the floor and Catarina and Ragnor both thought it best to leave him there. They took their eyes off him for a moment and he scuttled off, with Ragnor claiming that he saw Magnus making for the carpet like a huge demented crab. Magnus takes again to the sky, exclaiming that he could see great big monkeys and birds and llamas and kitty cats drawn upon the ground. Magnus believes he was hallucinating and claims that last night was almost the most drunk he had ever been and the most drunk was a sad story involving a birdcage. Catarina assures him that she and Ragnor saw the drawings as well and then tells Magnus that he ended up vomiting over the Nazca lines. Catarina wanted to try mundane medicine to cure the hangover which ended up having Magnus submitted to a full body guinea pig rub. Catarina and Ragnor would later reenact the time he tried to take the guinea pigs with him, shouting "Freedom!" and "I am your leader now!" Magnus a few days later has a single drink under supervision and Ragnor and Catarina, and tells the stories of their childhoods with Magnus hinting that his father was no ordinary demon.

Magnus Bane is back in Peru again, this time, the city of Cuzco. This time he meets an interesting mundane woman named Kitty. He meets her with a man named Geoffrey, a rude photographer for National Geographic. Magnus and Kitty run away together, after Magnus offers her an adventure and Kitty steals Geoffrey's mother's jewelry. They fall in love. And Magnus's sudden turn to a life of crime, shockingly enough, is not the reason he was banned from Peru either. The High Council of Peruvian warlocks meet in secret, and a letter is sent to Magnus several months later announcing that he has been banned from Peru, on pain of death, for "crimes unspeakable". Despite all of his inquiries, he never receives an answer to the question of what he has been banned for. To this day, whatever it is that actually got him banned from Peru is - and must always remain - a mystery. 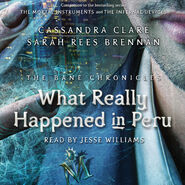