After living as a mundane and a vampire, Simon Lewis never thought he'd become a Shadowhunter, but today he begins his training at Shadowhunter Academy. Simon Lewis has been many things. A mundane. A vampire. A hero. But Simon can't remember any of that. His memories of adventures with Clary, Isabelle, and the rest of the New York Shadowhunters were erased by a demon, and now Simon is eager to reclaim that part of himself. But will he ever get back the parts of himself that he lost? Does he even want to?

Some months after Simon's memories were partially restored, weeks after it was decided that he would Ascend, the day has come for his trip to Idris, to the Shadowhunter Academy. After packing his bags, and contemplating what clothes and potential weapons to bring, he says good-bye to his mother, whom they had led to believe that Simon was going to attend military school instead of a demon-hunting one.

He goes to the New York Institute to bid the others farewell. Throughout this time, it is evident that Simon's missing memories have only started to return to him, and the fact that he has yet to remember a huge chunk of them bothers him enough that his main drive for attending the Academy in Idris is to get away from New York, and from his old friends whose expectations unintentionally pressure Simon (as well as from his mother and the unfortunate memory of her throwing him out). After the awkward good-byes, Catarina Loss makes the Portal to Idris and accompanies him through.

Arriving at Idris, they make the short trip to the Academy. Initially amazed at the sight of the Academy from afar, Simon is disappointed to see the state the Academy is in. By the entrance, Simon and Catarina encounter three Shadowhunters: Vivianne Penhallow, the Dean, and two students named Julie and Beatriz. Vivianne pulls Catarina aside to ask her for help regarding Academy issues, while Julie is instructed to take Simon to his room.

Julie begrudgingly accompanies Simon through the Academy to find his room. There, they see Simon's roommate, a legacy in the form of athletic George Lovelace, atop a stool, staying out of reach of a possum he believes to be demonic. George's fear scares Julie as well, leaving Simon to fend the creature off with George's tennis racket. He swats at the creature but only succeeds in driving it away from their wardrobe. Simon quickly gets along well enough with George, who introduces himself as the offspring of unofficial Shadowhunters (through a line of Nephilim whom refused multiple offers to rejoin the Clave after their ancestors abandoned the line of work in the 1700s). During their conversation, George then realizes that he was Simon—the hero vampire almost everyone at the Academy has been talking about since they arrived.

At dinner, Simon and George end up on a table with Julie, Beatriz, and a burly boy named Jon Cartwright, three seemingly stuck-up Shadowhunters who, upon realizing that Simon is of local heroic fame and George is a legacy, continuously point out that they will be among the stream for Shadowhunter kids, considered "elite" among themselves, as opposed to the curriculum stream for mundanes—derogatively called "dregs" by the others. While Simon begins to have reservations about his new circle, he goes along with it. Dean Penhallow then makes a speech, introducing two of the students' instructors: Catarina and the intimidating Delaney Scarsbury, their training master. She also informs the children that, due to the lack of food supplies, they will temporarily be served soup for the following days, or weeks.

The following day, Simon begins Shadowhunter training, and it does not start off well. While fitting Simon in gear, Scarsbury compares his body type to that of a girl's, and even gives him gear meant for a girl. Unfortunately for Simon, actual training is much worse. On the first day of swordplay, Simon is paired with Marisol, an orphaned mundane who the Shadowhunters recruited. Although she looks weak, she is actually a skilled fencer, and she beats Simon easily.

After several days of training (Simon is surprised to discover that one of the areas of skill is running), the Elites ride horses. While George is quite skilled, Simon is not, and the horse wanders around the forest for the day. When he returns to the Academy, Simon asks Scarsbury why no one came to get him, to which he replies that Simon had a dagger to fight off the bears. Simon asks if there are actual bears in the woods, but Scarsbury does not answer.

Throughout the next few days, Simon continues to be less than impressive, and Julie and Jon are not as friendly towards him as they were before. However, this changes when the class is introduced to archery; Simon surprises everyone by hitting every target. At dinner, Julie and Beatriz ask Simon to tell stories about Jace, and he tells them that he bit Jace. The girls are jealous that Simon got to have such a "moment" with him, and they ask for blow-by-blow details. When Simon reveals that he also bit Isabelle and Alec Lightwood, Jon is disgusted, because he thinks that Shadowhunters should not be "prey" to Downworlders. Simon is upset about this, but he decides to let it go for the sake of not causing a fight.

That night, Simon truly remembers Jordan for the first time. He feels anguish and grief as if Jordan had died that day, and George comforts him. At dinner the next day, when Julie insults werewolves, Simon tells her off and asks Dean Penhallow to be transferred to the mundane classes. She agrees, but unfortunately for Simon, he has made a public spectacle. He leaves, embarrassed, and bumps into Catarina Loss, who says that she misjudged him. Catarina thought that Simon resented being a Downworlder, but she now knows that this is not the case. She helps him move to the mundane barracks, which are located in the basement and are covered with slime. After Simon settles into his new room, George moves into the room, saying that he has also transferred into the mundane stream.

The next day, Simon and George go to breakfast and are joined by Beatriz, who has not dropped out of elite classes, but she still wants to be their friend. Then, they go to class to hear a guest lecture about uncommon weapons, but they are surprised to learn that the guest is actually Isabelle Lightwood, who announces that Simon is her boyfriend. After this, she leaves, as she never intended on actually giving a lecture, and Simon follows her out. He tells her that he cannot be her boyfriend because he is not the person she wants him to be. Isabelle responds by telling him that he must figure out why he wants to be at the Shadowhunter Academy, and wanting to be special is not a good enough reason. Then, she leaves, heartbroken.

That night, Simon retreats to the bathroom to have some alone time, but he is joined by George, who reveals that he is not a Lovelace by blood—his parents adopted him. However, the Shadowhunters did not know that, and George only told them of his true heritage when he saw Simon had the courage to stand up for what he believed in. Also, he reassures Simon that everyone at the Academy wants to become a hero, but Simon has a head start because he was one before he lost his memories. When they leave the bathroom, they find Catarina, who is dragging a tureen of soup. She explains that since Dean Penhallow refuses to order new food until they eat all the soup, she is burying it in the woods. Simon and George help her, and as they are leaving the building, Simon asks again if there are bears in the woods. 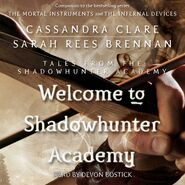