The Shadowhunters' Wiki
Register
Don't have an account?
Sign In
Advertisement
in: Series, The Wicked Powers
English

The Wicked Powers is a planned trilogy by Cassandra Clare. The fifth in the series chronologically, it is so far set to be the last and concluding series of The Shadowhunter Chronicles.[1][2][3][4][5][6] The title is derived from a Shadowhunter children's rhyme: "And bronze to summon wicked powers."

To reiterate, TWP is currently not yet in the works. Information listed below may be subject to change. 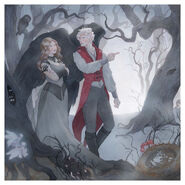 Teaser scene of Dru and Ash in Faerie