The Wicked Ones is the fifth short story in Ghosts of the Shadow Market, co-written by Cassandra Clare and Robin Wasserman.

Celine Montclaire goes to the Shadow Market to escape. She would go anywhere in Paris, or the entire world, to escape the suffering she experiences at the hands of her family. She did not expect to meet Valentine Morgenstern there, or to have him promise her freedom and the heart of the man she secretly loves.

Céline Montclaire is with Robert Lightwood and Stephen Herondale, on a mission to the Paris Shadow Market to track down a warlock, Dominique du Froid, whom Valentine accused of "shady business dealings with two rogue Shadowhunters." She is familiar with the Market, as she'd sought refuge there as a child abused by her parents.

At the Market, Céline watches Brother Zachariah purchase a heron necklace. To Brother Zachariah, she confesses her love for Stephen Herondale, but to attend to his other concerns, he hurriedly leaves in the middle of their conversation.

Brother Zachariah chases after the man he saw in the Market into an alley. There, he is cornered by Rosemary and Jack, who agree to meet him on the bridge at dawn, for accepting the protection he has offered.

Dominique sprays Stephen with a potion, causing him to be temporarily enthralled with Céline; he kisses her. Together, they fight a flock of Halphas demons.

Back at their home base, Robert and Stephen torture Dominique for answers. The love spell on Stephen had worn off, and Céline overhears them laughing about her and calling her a pathetic child. Hurt, she runs away.

On the streets, she discovers a Shax demon. She tracks it to the bridge, where she finds Rosemary and Jack in an embrace, and kills it before it could attack. She witnesses Jack swallow a potion that transforms his face from young and handsome, to older and hideous. An Achaieral demon attacks Rosemary as soon as Jack leaves and Céline saves her life. In exchange for her help, Rosemary offers her a warning: "Stay away from Valentine Morgenstern."

Brother Zachariah arrives at the bridge and discovers Rosemary instead of Jack. He is surprised, having originally believed Jack to be the Lost Herondale. However, when he gives the heron necklace to Rosemary, he has already realized that it is she who is the Lost Herondale. Rosemary refuses to accompany him for protection and he informs her that he has enchanted her necklace with a spell, which she could use to summon him at her time of need.

Céline sneaks into Valentine's apartment. Through eavesdropping on his conversation with the beaten-up Dominique, she discovers the warlock had been in business with him rather than two rogue Shadowhunters; she witnesses the warlock's murder. Valentine discovers her hiding behind the curtains and is not angry with her. He tells her he'd used the warlock to plant evidence with which he could use to incriminate the Shadowhunters who were against the Circle. He intends for them to be killed on their way to the Silent City before they can be tried by the Mortal Sword. He offers Stephen Herondale in exchange for her silence.

Céline discovers at the sentencing that the accused Shadowhunters were her parents. Valentine tells her he never feared she would turn against him, as he understood the truth of her and knew he was doing her a favor. Céline chooses to let her parents pay for what they'd done to her, remain loyal to Valentine, and accepts the promised gift of Stephen. 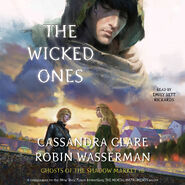