The Whitechapel Fiend is the third short story in Tales from the Shadowhunter Academy, written by Cassandra Clare and Maureen Johnson. It was released on April 21, 2015.

There are two guest teachers this week, and—just Simon's luck—they're both Herondales. When Jace teaches a class at the Academy, warlock Tessa visits to share the true story of the Jack the Ripper murders.[1]

Jack the Ripper stalks through London, and only the Shadowhunters can stop him.

Simon learns the truth behind the Jack the Ripper murders—"Jack" was hunted by Will Herondale and his Institute of Victorian Shadowhunters.[2][3][4]

The story opens with Simon and George talking to each other in the middle of the night about their disgusting room. George later correctly guesses that the distracted Simon is thinking about Isabelle. The next morning, Scarsbury tells the dregs class that they are going to climb up a tree, and that their guest teacher is none other than Jace Herondale. Simon is annoyed to find that all of the girls at the Academy are obsessed with Jace. Jace teaches the class how to drop, not fall, from a tree. Simon waits until the last possible moment to try the exercise; to his surprise, Jace turns out to be a good teacher. Still, Simon manages to embarrass himself by landing in a heap.

At lunch, Simon sits with Jace. Jace tells Simon that he has been researching the Herondale family history, and he has realized that there were amazing people in his family, along with bad ones. Simon then asks Jace for advice about Isabelle and Alec, both of whom Simon believes are angry at him, but Jace refuses to get involved and instead gives him advice about their exercise from earlier.

Later that day, Catarina introduces their guest lecturer: Tessa Gray, who would be explaining the role Shadowhunters play in history, even those of mundanes'. She tells the class that she is half-demon, half-Shadowhunter, and that she had a Shadowhunter husband and children. Tessa thinks of herself as a living record of history, as she is one of the few people alive who knows the truth behind events that mundanes used myths to explain away. Tessa asks the class what they know about Jack the Ripper, and when Simon references the plot of the graphic novel From Hell and Tessa recognizes it, Simon finds himself slightly infatuated with her.

Tessa goes on to tell the class about her time as Tessa Herondale, particularly 1888, when the Jack the Ripper murders.

In their home at the London Institute, Tessa admonishes her husband Will Herondale for allowing their son James to carry a knife around the Institute, and she replaces it with a spoon instead. While Tessa reminisces about the early days at the Institute, Gabriel enters the room, clearly in distress. He is concerned about the Whitechapel murders, in particular the note that the killer left on the scene. Gabriel says that the timeline of the murders does not make sense because a human could not possibly accomplish multiple murders in that short of a time span, which leads him to believe that a demon is behind them.

Gabriel points out that the demon seemed to be taking the childbearing organs out of the victims, all of whom were female prostitutes. Gabriel insists that they begin to patrol Whitechapel in search of the killer and suggests that Tessa and Cecily draw out the demon, who seems most interested in women. Will agrees to the plan, on the condition that Brother Zachariah accompany them. Although Gabriel clearly thinks this is a weird request, he agrees.

Back in the present, Tessa dismisses the class for a short break. Jace goes to Simon and George; Jace compliments George for their exercise, and George is starstruck. Simon tells Jace to talk to Tessa as she might be able to shed some light about the family history he hopes to know. George is surprised that Jace treats Simon like his equal, despite knowing that they'd known each other before he lost his memories, and when Jon Cartwright makes a comment about catching up with him later, Simon tells him to just stop pretending.

Tessa continues the lecture and picks up on November 9, 1888. Tessa and Cecily have disguised themselves, even glamoured, as poor women on their patrols, which they've been doing for about a month by then. The investigation is taking a toll on all of them as the parents would find themselves unable to keep up with their children's energies after their exhausting nights on patrol.

After their patrols that day, they proceed to the Ten Bells pub where Will and Gabriel did their part of the investigation. They rehash that the demon is likely an Eidolon who always takes the shape of a man, but they are getting nowhere in their investigation. Later at the Institute, Gabriel checks the newspaper and tells them that there has been another murder — the worst one yet. The victim was a woman named Mary Kelly.

Tessa, Will, Gabriel, and Cecily go to the scene of the crime, and crowds have already gathered there. Tessa Changes into Detective Abberline and Tessa is horrified by the remnants of the gruesome murder. She asks the doctor who inspected the body for the details before leaving.

They travel back to the Institute, and when they close, Tessa feels that something is wrong. Her instincts are correct, as Bridget is found unconscious at the foot of the staircase and the children are missing. All of a sudden, they hear the voice of the demon, who says that s/he has the children, and s/he wants to play a hiding game with Tessa, Will, Gabriel, and Cecily. Jem arrives, and he senses that the children are alive and located somewhere in the house. Tessa realizes that the demon is likely a child, and it is looking for a mother figure. As Tessa voices this theory, Jessamine's ghost announces that she will play the hiding game with the demon. Jessamine convinces the demon to tell her where the children are so that they can come to her room to play with the dollhouse. After the adults locate the children, they arrive in Jessamine's room to find her with the demon. Jessamine tells the demon that they are going to play a fun game in which the demon needs to close its eyes. The demon, whose form is that of a young girl no more than five years old, obeys, and Will stabs her in the back with his seraph blade, killing it.

The story returns to the present day. Tessa tells the class that the demon was killed, but there was still work to do; the Shadowhunters had to convince the mundanes that there was an explanation for the murders other than a demon. There was much media attention focused on the killings, and since the murders stopped without finding the culprit, the mystery grew. The Shadowhunters considered staging a capture, but they were afraid that the mundanes would implicate them. However, such action was not needed, as the mundane media came up with so many theories that the truth was easily muddled. After Tessa finished her lecture, she embraced a man who was young and handsome, with black hair except for a single white streak. Simon realizes that the man is Jem Carstairs, formerly Brother Zachariah, and he thinks that his relationship with Tessa must be very complicated.

After Simon and George returned from dinner that night, they found Jace waiting in front of their room. Jace asks to speak to Simon alone, and Jace thanks Simon for telling him about Tessa; he found that she knew much of the Herondale family history, and he was happy to meet someone else with his blood. He told Clary, who apparently knew about Jace's relation to Tessa the whole time, but Tessa wanted Jace to come to her on his own. Jace says that he has never been happier; everything in his life is right, except for Simon not remembering him or the other New York Shadowhunters. Simon responds by telling Jace to wait outside while he does something in his room. Once he is inside, Simon goes about his usual routine before bed, until he decides to begin writing a letter to Isabelle. In the letter, Simon tells her that he is trying to figure out who he is, and that if she waits for him, he will make himself worth the wait, or at least try to do so. After writing the letter, he gives it to Jace to give to Isabelle. Jace tells Simon that he used to call him Wiggles before leaving. Although Simon knows this is untrue, and that Jace will call him that for the rest of his life, he remarks that it is "a small price to pay to get a letter to Isabelle." 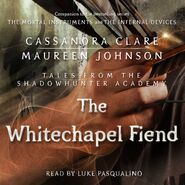