The Runaway Queen is the second released short story in The Bane Chronicles.

Magnus Bane has a royal role in the French Revolution—if the angry mobs don’t spoil his spells.

While in France, immortal warlock Magnus Bane finds himself attempting to rescue the royal family from the horrors of the French Revolution—after being roped into this mess by a most attractive count. Naturally, the daring escape calls for invisible air balloons...

The story begins with Magnus Bane going to a park near Château de la Muette, a beautiful little palace, to go for a ride in a hot air balloon. Unfortunately, due to the unfavorable climate, the ride is postponed. Dismayed, Magnus decides to have a turn around the park, when he is spotted by Henri, a darkling of Marcel Saint Cloud, the head of the most powerful vampire clan in Paris. He invites Magnus to a party on Monday, which he has to accept in order to avoid offending Saint Cloud.

Magnus returns back to his apartment, which is kept by an older couple, Marie and Claude. That is when Axel von Fersen approaches him, requesting to help save the French Royal Family, who now live at the Tuileries, a broken-down old palace in the middle of Paris. Charmed by his calmness, Magnus agrees and both of them plan to dine together the next day and to discuss the strategy of the escape on Sunday. The next night, Axel discusses the plans and the role of Magnus in glamouring the queen. In return for helping the Queen, Magnus asks Axel to meet again. Due to some problems, Axel sends a note to Magnus telling him that the escape plan has been delayed till Monday, the same day the party by Saint Cloud is held.

Magnus, as on plan, meets the Queen in her private bedroom and glamours her to look like a Russian noblewoman. After his work is done, he goes to the party, where he finds out that a vampire named Coselle has found the escaping Queen Marie Antoinette, who got lost in the streets. Magnus lies and says it is a woman named Josette, mistress of his client, who wants her to look like the queen. Nevertheless, Saint Cloud wants to buy her, and Magnus tries to stall him, saying he needs to finish the glamour and sign his work. Saint Cloud has Magnus and "Josette" locked in the blue room of his house until the glamour is completed. Magnus uses his magic and brings the balloon from the other side of Paris to the blue room's window. He escapes, taking the queen along.

Magnus then meets Axel and urges him with the queen to escape the place. Magnus, when he has returned to his apartment, learns from Henri that Marie and Claude have been taken and killed by Saint Cloud, and at once he leaves Paris for the Alps. After several days, he learns that the Royal Family was captured and taken back to Paris and imprisoned. Concerned for Axel, Magnus writes a letter to him. After three weeks, he gets a reply from Axel's sister, Sophie, informing that Axel has been moved to Vienna to plead the royal family's case to the Emperor, but she fears that he is determined to return to Paris, at the risk of his life. She requests Magnus to write a letter to him, discouraging this enterprise with an address in Vienna. Magnus thinks once again of Axel, standing in his parlor and then he lights a match and burns the note. 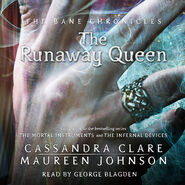