The Shadowhunters' Wiki
Register
Don't have an account?
Sign In
Advertisement
in: The Eldest Curses books
English

The Red Scrolls of Magic

This article is about The Eldest Curses installment, The Red Scrolls of Magic. You may be looking for the cult book this is named after.

The Red Scrolls of Magic

The Red Scrolls of Magic is the first book of the The Eldest Curses trilogy, co-written by Cassandra Clare and Wesley Chu.

All Magnus Bane wanted was a vacation—a lavish trip across Europe with Alec Lightwood, the Shadowhunter who against all odds is finally his boyfriend. But as soon as the pair settles in Paris, an old friend arrives with news about a demon-worshipping cult called the Crimson Hand that is bent on causing chaos around the world. A cult that was apparently founded by Magnus himself. Years ago. As a joke.

The titles of each part and the epilogue refer to its corresponding setting.

Malec in Paris, in front of the Eiffel Tower

Dancing at the party in Venice

Alec driving a Maserati with Magnus and Shinyun on their way to Rome. 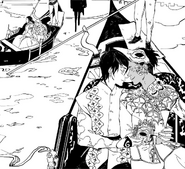 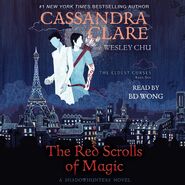 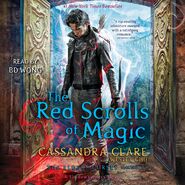