The Shadowhunters' Wiki
Register
Don't have an account?
Sign In
Advertisement
in: Series, The Mortal Instruments
English

This article is about the book series. You may be looking for the film, the TV adaptation, or the eponymous artifacts.

The Mortal Instruments is a series of young adult novels by American author Cassandra Clare and is the first of the Shadowhunter Chronicles.

The series follows Clary Fray, Jace Herondale, Simon Lewis, Isabelle Lightwood, Alec Lightwood and other Downworlders and Shadowhunters in the New York Institute. Seemingly normal at first, Clary soon gets sucked into the world of Nephilim and other creatures when she finds out that she is a Shadowhunter. 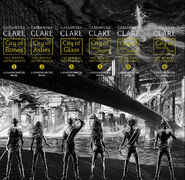 The first of the series, City of Bones, was adapted onto the big screen, The Mortal Instruments: City of Bones, produced and distributed by Constantin Film. Initial reports claimed plans for a film trilogy based on the first three books; however, due to the film not meeting the expected success, the sequel's production was constantly delayed, until it was ultimately scrapped.

On October 12, 2014, it was announced that The Mortal Instruments would instead be relaunched by Constantin Film as a television series, which premiered on January 12, 2016 and is currently on its third season.

To coincide with the movie release, a graphic novel also based on the first book was released in 2013 but was discontinued after seven issues. In 2015, it was announced that the graphic novel rights to the series has been reclaimed and will instead be adapted into one graphic novel by Cassandra Jean.