The Lost Herondale is the second short story in Tales from the Shadowhunter Academy, written by Cassandra Clare and Robin Wasserman. It was released on March 17, 2015.[1]

Simon learns about the worst thing a Shadowhunter can do: desert their comrades.

In the early 19th century, Tobias Herondale abandoned his fellow Shadowhunters in the heat of battle and left them to die. His life was forfeit, but Tobias never returned, and the Clave claimed his wife's life in exchange for Tobias's. Simon and his fellow students are shocked to learn of this brutality, especially when it is revealed the woman was pregnant. But what if the child survived…could there be a lost Herondale line out in the world today?

The story opens with Simon Lewis in physical training class at the Shadowhunter Academy, contemplating its similarity to gym class in the mortal world. Scarsbury interrupts his thoughts and makes him do various exercises in an attempt to humiliate him, culminating at the climbing wall. After being the last student to climb the wall, Scarsbury talks to the 20 most promising Shadowhunters in the class, including Simon. Scarsbury informs them that they will be expected to deal with a rogue vampire in two days' time. Even though some of the students are still mundanes, including Simon and George, they will still be expected to participate.

Later that day, Simon and George are playing Go Fish in the student lounge when Beatriz, Julie, and Jon ask Simon to tell them what he knows about vampires. Simon insists that he does not recall anything from his life before going to Edom, but nobody believes him. Then, Julie, Jon, Beatriz, and George talk about how they will fight the vampire. Simon tries to leave, but George stops him, saying that he should've believed him. Julie seconds this sentiment, and she reveals why she is at the Academy instead of at home—her mother was one of the first Shadowhunters to be Turned into an Endarkened soldier, and her sister, Elizabeth, was one of the last children to die in the Accords Hall. Julie says that the assignment is a big deal because things could easily go wrong.

The next day, Catarina Loss introduces a guest lecturer, Lazlo Balogh, the Head of the Budapest Institute. Balogh informs the class that the worst thing a Shadowhunter could possibly do is desert his comrades during a battle. One of the most famous cases of desertion occurred in 1828, when a group of Shadowhunters was dispatched to deal with a group of warlocks attempting to summon a Greater Demon in a forest in Bavaria. Balogh says that the Shadowhunters would've been able to deal with the warlocks and demon, except that the youngest in the group, Tobias Herondale, ran away, resulting in the deaths of the other Shadowhunters. Later, when the Clave brought charges against Tobias, he never showed up, so his pregnant wife was killed in his place.

Later, George and Simon leave the Academy to deal with the rogue vampire, who happens to be in an empty warehouse in Brooklyn, near Simon's home. Scarsbury informs the Shadowhunters that they must execute the rogue vampire for breaking the Law, and it must be done before sunset. Simon is paired with Jon, to his dismay, and the vampire finds them immediately. She is about Simon's age, and she begs him to let her out, as she knows that he was once the Daylighter. Simon hesitates to kill her, so she attacks him. Luckily for Simon, Isabelle comes to the rescue, and she kills the vampire. Simon is angry at her because she killed the vampire for him when he was supposed to be the one to do it. Hurt, Isabelle leaves, just as Jon wakes up and celebrates the killing of the vampire, even though he played no role in it.

After returning from Brooklyn, Simon and George are having dinner with Jon, Beatriz, and Julie. Simon says that he does not understand why Downworlders are not put in jail before being executed, but he is told that Shadowhunters are not as merciful as mundanes. As Simon continues to complain about this injustice, Beatriz cuts in and asks him why he is here if he had the choice to come here. Simon avoids the question by leaving the dining hall, but he bumps into Catarina Loss, who asks him to take a walk with her. Catarina tells Simon that she overheard him say that he thinks Shadowhunters do not treat Downworlders fairly, so she decides to tell him the other version of Tobias Herondale's story.

Catarina knew Tobias Herondale from the time that he was a baby and she says that he, unlike his family members, was mild-mannered. Tobias likely wanted to give up the Shadowhunting life, but he was not brave enough, and he was only taught to follow the Law, anyway. When Tobias grew up, he married Eva Blackthorn, a girl who was the polar opposite of him, and he loved her. Eva was pregnant with their child when Tobias was called to go on that fateful mission in Bavaria. Although Tobias did not want to go, he did anyway. One of the warlocks bombarded him with false visions that convinced him that his wife was in danger and that Tobias himself was the only one who could save her. After seeing these visions, he ran away to save her. The Clave knew that Tobias had been driven mad by the warlock, but they still considered him guilty of desertion. When Tobias failed to return to receive his sentence, the Clave took Eva into custody to pay the price of Tobias's crime. Although she was unable to save Eva or Tobias, Catarina was able to save their child with a spell to make the baby come early, and another one to make Eva look as though she was still pregnant. After Eva was killed, Catarina sailed to the New World with Tobias and Eva's child, and she raised him herself. Catarina says that she could not give the child to the Clave because they were undeserving of him. When Simon asks if there is a living Herondale besides Jace in the world, Catarina admits that it might be a possibility. Catarina encourages Simon to choose his own path.

When Simon returns to his room, he finds George waiting outside the room. George says that Clary kicked him out of the room, so Simon goes inside to talk to her. Clary says that she is worried about Isabelle; she is not doing well as a result of her fight with Simon. Simon says that he is sorry, but Clary refuses to tell Isabelle, as she would be mad if she knew that Clary talked to Simon about her. Then, the two friends talk about the story of Tobias Herondale, and Simon wonders if he should tell Clary to tell Jace about the possibility of a lost Herondale line existing in the mundane world, but he decides not to tell her. Instead, he complains about how his fellow classmates are more athletic than him, but Clary says that being strong is not the only asset necessary to be a good Shadowhunter; Simon possesses bravery and wit. Clary tells Simon that they might not have gotten out of Edom alive without Simon, who deduced a plan to get into Sebastian's lair based on Dungeons & Dragons. Before Clary leaves, Simon recognizes her as not a stranger, but a close friend, for the first time since his memory was wiped in Edom. Simon asks Clary if they were great friends before, and she says that they "were absolutely amazing." 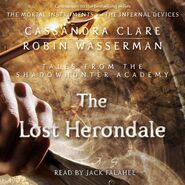