The Last Stand of the New York Institute is the ninth released short story in The Bane Chronicles.

Magnus meets Valentine in battle as the Circle attacks the Downworlders of New York City.

In the time of the Uprising, Valentine's Circle goes after Downworlders in New York... and the Shadowhunters of the Institute must decide whether to join him, or fight with Magnus and his kind. This is the first time Magnus sees Jocelyn, Luke, and Stephen — but not the last. It is not long before Jocelyn seeks him out...

Magnus Bane waits for his friend Catarina Loss after her shift outside an AIDs clinic where she works. He is watched by a man who takes a disliking to him because of his appearance. The man tries to goad him with insults which Magnus ignores, frustrating the man. Patrolling police cause the man to wander off and Magnus reminisces about the way the neighborhood used to be years ago.

The man reappears, having just walked around the block to avoid police, and attacks Magnus who uses magic to send the man flying into a fire hydrant. Catarina exits the building as the man regains consciousness and tries to help him. He recoils, telling her not to touch him because she has come from the clinic, and runs away. She asks Magnus if he is okay and why he is outside the clinic. He explains to her that he came to see her home because it's not safe. She is exhausted and Magnus takes her to a restaurant to eat.

While there, they discuss the recent appearance of The Circle, the real reason Magnus waited for Catarina. Magnus worries about what the Shadowhunters of the New York Institute would do if The Circle ever came to New York, having been told by Marian Whitelaw that The Clave will not help. After they finish eating Magnus pays and takes Catarina home before going home himself.

At around one in the morning, Magnus notices a young boy pacing outside his window. He deduces from the boy's appearance that he is a werewolf and lets the boy in. The boy explains frantically to Magnus that The Circle has his family trapped in a Downworlder safe house in Chinatown and that he managed to escape to come find him for help. Magnus sends the boy to stay with Catarina. Before he leaves, he sends a message to the Whitelaws with the address of the safe house and a brief summary of the situation, though he doubts they will come.

Magnus runs all the way to Chinatown and finds the werewolf pack crouched against a wall, surrounded by a group of Shadowhunters. He scans the crowd for Valentine Morgenstern, but cannot find him. Instead, he notices individual members, Robert and Maryse Lightwood, Lucian Graymark and Stephen Herondale, as well as a door at the end of the room being guarded by a stocky Shadowhunter.

After a brief conversation with Lucian, Magnus tries to appeal to Stephen by revealing his friendship with his family which is a mistake, as Stephen obviously is ashamed at his ancestors acquaintance with Downworlders.

Magnus exchanges words with the Shadowhunters but can't help staring at Stephen, due to his resemblance of Edmund Herondale. Stephen sees Magnus looking at him and loses his patience, flinging a knife at one of the werewolves despite Lucian's protests.

Magnus deflects the knife with magic while Robert draws a dagger and throws it at him. Magnus dims the lights with magic and at that moment the Whitelaws crash through the windows, Rachel Whitelaw taking the dagger in her shoulder.

Magnus notes that all the Whitelaws are present with the appearance of previous fighting. Marian, her husband Adam, his brother, and the two young Whitelaw cousins are all covered in blood. In the dim light the Circle doesn't see who is attacking them and in the noise they don't hear Marian calling for them to drop their weapons. A fight breaks out. Magnus summons a ball of light and tries to reach the werewolves, and comes across Stephen, who tries to stab him. Magnus feels a sudden hatred for him, wanting to kill him, but spares him for Tessa's sake.

Marian finds them and is illuminated by Magnus' ball of light, shocking Stephen as he recognizes her. She states the werewolves are innocent and engages him with her sword. In the ensuing fight, Rachel Whitelaw is killed by Robert, causing the Whitelaws to fight even harder.

Magnus makes his way to the werewolves who tell him Valentine has taken one of their children into the other room. He blasts the Shadowhunter away who was guarding the door and finds the werewolf girl inside, tied to a chair with silver coins fastened to her eyes. Valentine stands over her, demanding to know where her brother is.

Magnus is enraged and lashes out at Valentine with his magic, knocking him into a wall. He crosses to the werewolf girl and takes the coins off her eyes, hoping he can heal her, but he realizes she is already blind. While he is distracted, Valentine stabs him.

Magnus turns and is stabbed again. He goads Valentine, taking blows, and slowly moves him away from the werewolf. Through his blurred vision Magnus sees Marian challenge Valentine, who swings his sword so hard he cuts her nearly in half. Before he kills Magnus, Lucian appears in the doorway, and runs to the girl. He picks her up and tries to comfort her, asking Valentine how he could do this to a child. Magnus begins to question his dislike for Lucian.

Valentine and Lucian exchange words, with the werewolf still in Lucian's arms. Valentine calms down and allows Lucian to carry the child back to the werewolves, following behind him. Left alone, Magnus uses the last of his power to heal himself, and runs after them. In the main room the lights are back on and the battle is over; all the Whitelaws are dead along with a few Circle members, and one of the wolves. The remaining Circle members are panicked, and cluster around Valentine when he appears, seeking reassurance like children. Magnus cannot bring himself to feel sorry for them.

Valentine tells them they upheld the Law, and they are to tell The Clave that the Whitelaws died "because of rogue werewolves." Ignoring this, Lucian takes the werewolf girl back to the pack, and her mother. He convinces Valentine to leave and attack the pack. Valentine agrees, and embraces Lucian, but Magnus notices the look in his eyes and suspects that Lucian is as good as dead.

The Circle leaves, and Magnus runs over to Adam Whitelaw, lying in a pool of blood. Adam, dying, asks after Marian and the children but sees the answer on Magnus' face. Magnus uses what magic he has to ease Adam's pain, but the Shadowhunter stops him, saying he doesn't want to live. He shuts his eyes, and Magnus gives him the Shadowhunter farewell. Then, the last of the Whitelaws dies.

Some time later, Magnus reflects on the events following the attack. He tries to tell The Clave the truth, but they don't believe him. Lucian disappears, and Magnus assumes he is dead until he hears from Ragnor that there is a werewolf who used to be a Shadowhunter spreading the word that Downworlders need to be ready.

The Circle attacks during the Accords, and Magnus is surprised that the Shadowhunters join with the Downworlders and fight them. He is disappointed though, that the Nephilim blame the Downworlders for the deaths of their people. He despairs that relations between the Shadowhunters and Downworlders will ever improve. Magnus is also angry when the Lightwoods are exiled to New York. He doesn't look forward to the time when he must work with them. Magnus forgets about The Circle.

Magnus is in his apartment watching Pride & Prejudice with Tessa Gray. He stands by the window, waiting for a delivery of Chinese food, when he notices a woman carrying a child on the street. He thinks nothing of it, and hears his bell ring, thinking it is the delivery. He opens the door and is confused when he sees the woman from the street. He recognizes her as a Shadowhunter, due to her faded Marks. She introduces herself as Jocelyn Morgenstern, and Magnus remembers the name, wondering why "the monster's bride" is at his door.

He swings open the door so Tessa can see, and notices the bundle in Jocelyn's arms, remembering she had a child on the street. Jocelyn tells him she's come to beg for help, and Magnus refuses immediately, until he hears Tessa ask for him to let her in, saying she wants to speak with her.

Tessa comes to the door and asks Jocelyn if she is a Fairchild, which confuses her. She asks Tessa if she is a warlock, and Tessa says yes, but reveals her mother as a Shadowhunter.

Jocelyn is shocked, but composes herself and tells the warlocks that her daughter is Valentine's child, and that they cannot go back to the Shadowhunters. She asks Magnus for help again, and tries to appeal to Tessa by mentioning Stephen Herondale, but Tessa tells her the truth: that Stephen would have killed her if he met her, and that because of Jocelyn and Valentine her line, Will's line, is ended.

Jocelyn looks ashamed, but Tessa continues, saying she may have dishonored herself but the child is innocent. Magnus is still reluctant, and Tessa asks to hold the child, which Jocelyn consents to. She tells Tessa her name: Clarissa, nicknamed Clary. Magnus peers over Tessa's shoulder and stares into Clary's face. The sight of Clary's joy eases his resentment. Tessa lets Clary crawl around the floor, and Jocelyn asks Magnus if he can remove Clary's Sight, which he refuses to do as it would cause mental harm.

Magnus reminds Jocelyn that Clary will need the Shadowhunter childrens' ritual, but she explains to him that any Silent Brother or Iron Sister she asked to do the ritual would report them to The Clave. Jocelyn refuses to take the risk, saying Clary will be fine simply not knowing about the Shadow World, but Tessa reminds her that her own mother knew nothing of the Shadow World and it didn't keep her safe.

Jocelyn is horrified as she realizes what Tessa is implying. Tessa picks Clary up again after she stops screaming, and the child rubs her face into Tessa's shirt, which Jocelyn interprets as a sign that Tessa is a friend. Tessa offers to help with the ritual, saying she knows a Silent Brother who can keep a secret.

Jocelyn thanks her, and Magnus tells her that if she isn't a Shadowhunter anymore, she should change her name. Jocelyn decides on "Fray", a combination of Fairchild and Gray, to honor Tessa's friendship with her ancestors. Magnus thinks of the new generation of Nephilim, and greets Jocelyn and her child as "Jocelyn and Clary Fray", and telling them it's nice to meet them. 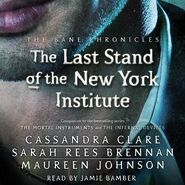