The Land I Lost

The Land I Lost

The Land I Lost is the seventh short story in Ghosts of the Shadow Market, co-written by Cassandra Clare and Sarah Rees Brennan.

Alec Lightwood, partner of the High Warlock of Brooklyn and father of a warlock child, is sent to Buenos Aires to re-establish the Shadowhunters amidst the ruins left by the Dark War. When he arrives, he is not welcomed by the Shadowhunters there. He believes it is because of his companion Lily, the head of the New York vampire clan, until a Shadowhunter orphan confides a dark secret to him under cover of the Shadow Market.[1][2]

Alec receives a message from Jem and Tessa requesting help in Buenos Aires.

In the main room of their apartment, Magnus has summoned the demon Elyaas. Magnus wants Max to be comfortable with what summoning demons entailed lest he is tricked or terrified when he summoned his first; he’d been regularly summoning demons for Max to resist their temptations and rewarding him for it.

Not wanting to leave Max without a parent, Alec chooses Lily Chen as his Spanish-speaking partner for the mission. He finds Lily still grieving Raphael’s death, but excited to go to Buenos Aires to see her crush Jem.

Jem and Tessa receive a fire-message from Alec saying that he was going to be visiting the Buenos Aires Institute and rush to stop him from doing so.

Seeking hospitality at the Institute, Alec and Lily are greeted by Joaquín Acosta Romero who idolizes Alec and fears the Downworlders of their Shadow Market. They leave when met with the Breakspears’ hostility. Joaquín apologizes outside for the behavior of the rest of the Institute.

At the Market, Alec meets Juliette, the werewolf Queen of the Market he’d saved from demons on the Orient Express five years before; Alec hadn’t recognized her. Juliette informs him that the Market was a community of Downworlders, a refuge for the orphans of the Dark War and that werewolf women had been disappearing. The Buenos Aires Institute had been no help.

Among the orphans, Alec is enraged to discover Shadowhunter orphan Rafael who had not been taken in by the Buenos Aires Institute. Despite not liking Alec, Rafael lets him carry him to the lodging house where Jem and Tessa stayed.

Between Tessa and Lily (both of whom spoke Spanish), the four learned that Rafael had seen a Shadowhunter meeting a warlock at a big house containing women. The Shadowhunter is identified as Clive Breakspear using the wallet Rafael had stolen.

As Rafael sleeps, Lily tells Alec her past: She and her mother had been sold to a house where vampire women, ‘cold and lovely forever’ were chained for rich men. The night her mother was fed to vampires, she asked to be Turned in return for their freedom; instead, she burned the place down. She speaks of meeting Camille and meeting Raphael who made her feel safe and the mark he’d left on her life.

At the big house, Rafael had described, Alec discovers it’s heavily-warded and overhears ‘the next delivery from Breakspear will be at midnight that night. He visits Joaquín, gives him a scrap of paper with the address of the big house, and asks for trusted reinforcements.

Through a faerie at the Market called Mother Hawthorn, they learn the story of Auraline–the First Heir who’d been rejected by the Unseelie King for being female, who’d fallen in love with Roland Herondale and birthed the line of Lost Herondales hunted by the Unseelie since. This is the family Tessa and Jem had searched for over the years.

At the big house, Alec discovers that the female werewolves were trapped by a warlock experimenting with the possibility of producing a half-werewolf warlock. He and Lily engage with the warlock, fighting with him until the house is ablaze. Tessa and Jem join in when Clive arrives. Clive hurls Rafael into the bars of the cells. Alec knocks both Clive and the warlock out, asking Tessa to enchant some ropes to hold them while he sees to Rafael. Alec begs Jem and Tessa to take care of him. Alec focuses on saving the werewolf women still trapped in the house as it burns. With help from the Shadowhunters and Downworlders, he is able to save them all.

Outside, Jem and Tessa realize they need dittany to save him, and Jem asks Mother Hawthorn to give him some, guilting her by telling her what had happened with Matthew and Charlotte, over a century ago. They are able to heal and revive Rafael.

Alec lectures the crowd outside of Buenos Aires about the wrong that had been done and how it would be put to justice. He asks Joaquín to take over as the new head of the Institute until the Consul deal with the case. He agrees and establishes an alliance with the Shadow Market.

Back at Magnus' apartment, Rafael grows attached to Magnus as Max grows attached to Rafael. They nickname him Rafe and choose to adopt him. When Max tells him he wants to be a Shadowhunter, Rafael rebuffs, saying he is a warlock. Magnus and Alec then decide to train both of them, so that they may choose to become whomever they wish to be in the future.

Others (in order of appearance): 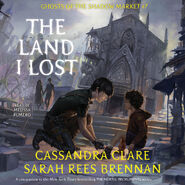