The Shadowhunters' Wiki
Register
Don't have an account?
Sign In
Advertisement
in: Companion books, The Bane Chronicles
English

The Bane Chronicles is a compilation of 11 short stories telling the tales of the High Warlock of Brooklyn, Magnus Bane, and co-written by Cassandra Clare, Sarah Rees Brennan, and Maureen Johnson. First released in e-book format, a print edition of the collection was published on November 11, 2014.

It's not easy being Magnus Bane. As a warlock, he's often called upon to fix problems of others. His life has been long, and his loves have been many, and Magnus has a way of making sure he's at the right place at the right—or perhaps wrong—time. The French Revolution, Prohibition, the first great battle between Valentine and the New York Institute... Magnus was there. But smuggling Marie Antoinette out of France is nothing compared to having a first date with Alec Lightwood.

Though Magnus's tale is far from over, these stories shed a little light on his often inscrutable character. What happens when an immortal warlock goes mad? Are all Herondales as problematic as Will? (Answer: yes.) And why was Magnus banned from Peru?

Magnus will never be able to tell all of his tales. No one would believe him. But here are eleven stories that fill in some of the blanks—stories he probably wishes had never gotten out.

The Rise of the Hotel Dumort

The Fall of the Hotel Dumort

What to Buy the Shadowhunter Who Has Everything

The Course of True Love (And First Dates)

The Voicemail of Magnus Bane 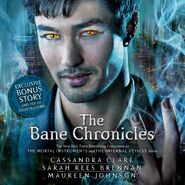