Tales from the Shadowhunter Academy

Tales from the Shadowhunter Academy

Tales from the Shadowhunter Academy is a series of novellas by Cassandra Clare, Sarah Rees Brennan, Maureen Johnson, and Robin Wasserman. Much like The Bane Chronicles, it is a collection of 10 short stories that was released monthly in e-book format before its publication as a compilation.

Simon Lewis has been a human and a vampire, and now he is becoming a Shadowhunter. The events of City of Heavenly Fire left him stripped of his memories, and Simon isn't sure who he is anymore. So when the Shadowhunter Academy reopens, Simon throws himself into this new world of demon-hunting, determined to find himself again. Whomever this new Simon might be.

But the Academy is a Shadowhunter institution, which means it has some problems. Like the fact that non-Shadowhunter students have to live in the basement. At least Simon's trained in weaponry—even if it's only from hours of playing D&D.

Join Simon on his journey to become a Shadowhunter, and learn about the Academy's illustrious history along the way, through guest lecturers such as Jace Herondale, Tessa Gray, and Magnus Bane.

Like The Bane Chronicles, the print edition will feature ten comic illustrations by Cassandra Jean—one for each installment.

The Evil We Love 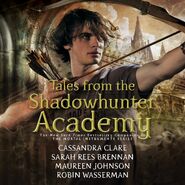