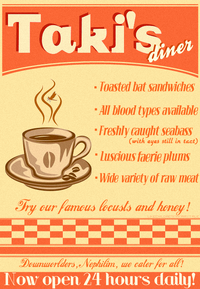 Taki's Diner is a Downworld café or restaurant in Manhattan, New York, frequented by several Shadowhunters, Downworlders, and even some mundanes.

It offers food and beverages for all of their varied clientele; aside from a selection of food for humans, there is also a section on the menu that lists food for Downworlders, such as animal blood for vampires, raw meat for werewolves, and whole raw fish for faeries.

In August of 2007, after Clary and Jace's trip to the Silent City, Jace called for Alec and Isabelle to meet them at the diner for breakfast. Simon, who was at the New York Institute when Jace called, tagged along. Their server was the faerie Kaelie, whom Jace flirted with. That being the first time Clary and Simon had ever been in a Downworlder joint, the others had to explain some of the creatures and the menu items in the diner. While eating, the group discussed their next course of action in their search for Clary's mother, Jocelyn.[1]

Some time after Alec began dating the warlock Magnus Bane, Taki's was one of the first Downworld haunts the pair went to, since Alec was nervous that someone might tell his parents about them. Just then, the vampires Raphael, Elliott, and Lily arrived and saw them. This encounter became a story Raphael passed onto Magnus' friend, Ragnor Fell.[2]

Jace was a regular at the diner. One evening, he and Clary were picking up food at the diner for the Lightwoods when Clary decided to tell Jace that she loves him; however, before she could even begin, Jace told her that he will only act as her brother from then on, assuming that it was what Clary wanted.[3]

Over the following months, the group began to frequent the diner more often.

In November the same year, after the search for Jace was deprioritized and a quick trip to the Seelie Court, Clary, Simon, Isabelle, and Alec all had dinner at Taki's to try and get a feeling of normalcy back in their lives, as well as soothe their frustrations.

Days after Clary stole the faerie rings from the Institute and saw Jace and Jonathan, Clary snuck out of Magnus' apartment and told Simon to meet him at Taki's. Once there, Clary told him that she was going to leave with Jace and Jonathan, with the intent of finding out what they were planning. She then gave Simon one of the faerie rings, keeping the other, so they could communicate and update each other telepathically.[4]

Retrieved from "https://shadowhunters.fandom.com/wiki/Taki%27s_Diner?oldid=113122"
Community content is available under CC-BY-SA unless otherwise noted.