Saving Raphael Santiago is the sixth released short story in The Bane Chronicles.

A Manhattan teen—Raphael Santiago—is missing, and Magnus Bane must track him down before it's too late.

One of the more interesting jobs Magnus has ever been involved in... A distraught mother in 1950s New York hires Magnus to find her son, Raphael. But even if he can be found, is Raphael beyond saving?

At the end of summer 1953, in New York, Magnus Bane starts as a private eye and helps people for the actual money. One day a woman, named Guadalupe Santiago, appears in front of his apartment. She asks him to save her son, Raphael Santiago, as she fears he may be in trouble. At first, Magnus thinks that her son is just sick, but Guadalupe tells him that Raphael is missing and might be dead. She has a little bit of knowledge about the Shadow World and suspects that it may have something to do with vampires. Magnus swears to find her son and starts searching.

Before going to the place of the boy's disappearance - Hotel Dumont, he decides to ask other Downworlders for information about the vampires. Magnus pays a visit to his faerie friend Aeval. From her he finds out that there is a vampire from Hungary named Louis Karnstein who prefers young children. She encourages him to get rid of the guy before Shadowhunters find out and make it worse for all Downworlders.

Unwilling, Magnus still goes to check on the Hotel Dumont and ask about Louis from its residents, as from the 1920s it has been occupied by vampires only. He is restricted from entering by a young vampire girl. However, she lets him in later as a result of Magnus threatening to bring in the Nephilim. She recognizes him immediately and hints the direction of Louis's room.

Magnus finds the room easily and there he sees a vampire sucking blood from a young boy among the other bodies. He flings the vampire against the wall by using his magic and crouches down with the body of that young mundane in his arms. Magnus then asks the vampire if the boy's name was Raphael and the vampire answers with a laugh that it's his own name instead. Raphael tells Magnus that Louis had hoped to make him his sidekick in killing but instead, Raphael has killed him. Right after telling Magnus the whole story of what has happened he tries to burn himself in a beam of sunlight, but he is stopped by Magnus. Magnus tells him that he was sent by his mother Guadalupe, by hearing these words Raphael calms down.

Magnus brings Raphael to his own home out of despair. To make Raphael feel motivated to live again, Magnus encourages him to learn how to hold his silver cross. This motivates the young boy to start training in order to casually say 'God' and step on sacred ground. Raphael wants to be as prepared and controlled as possible before he comes back home to his mother.

As time goes by, Raphael feels stronger and Magnus becomes accustomed to him as his 'always irritated and irritating housemate'. When Raphael is able to wear his cross for the whole night without crying out loud, Magnus offers to take him home. However, the vampire refuses and says that he is not done yet. The next night they go out to the sacred graveyards and Raphael charges right into it, surprising the warlock, and actually repeats the same action ten more times, regardless of the horrible pain he feels.

One day, High Warlock of London, Ragnor Fell pays a visit due to some spell requests from the Shadowhunters. He mistakes Raphael for Magnus's boyfriend and judges him, as Raphael is only 15. Raphael starts protesting by criticizing Magnus which amuses Ragnor and they become friends shortly afterward, much to Magnus's unhappiness.

After one of the training nights, Magnus and Raphael walk and notice four vampires attacking a mundane girl. Two of them are Lily and Derek. Raphael tells them off, even though he is far younger than they are, and they quickly feel intimidated by him and his confidence. He then performs encanto on the mundane girl and sends her home, convincing the girl to forget everything.

Some days later, just before they go to Raphael's house, Raphael tells Magnus that he will go and live with vampires after this visit no matter what. After the family reunion, Magnus leaves, not taking the money for the job, only to be chased by Guadalupe. She begs him to take the payment, but he does not, as he says he was not the one who saved her son, and that Raphael did it himself. 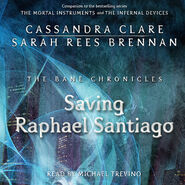