Raziel is the patron angel of the Shadowhunters.

Raziel is believed to hold the rank of archangel within the heavenly hierarchy. In Jewish mystical traditions, he is often called the Keeper of Secrets and the Angel of Mysteries. Within Shadowhunter society, Raziel holds a special, almost god-like role as their patron and creator.[1]

What is known of Raziel's interaction with Jonathan Shadowhunter and the world's first Nephilim were based on translations of accounts supposedly written by David the Silent.[1]

Shortly after 1000 AD, the Angel Raziel was called upon by a mortal named Jonathan, though some believe that Raziel was summoned by a warlock.[2] Desperate to help save mankind (including himself and his companions: his sister Abigail and his friend David) from the scourge of demons traveling past the world's wards in an event referred to as the Incursion, Jonathan prayed for Raziel to save humanity, begged him to mix his blood with the blood of mortals in a Cup and create a race of warriors who would rid the world of demonkind. Raziel rose from Lake Lyn and, upon seeing that Jonathan's wish and vision for his world was pure and true, Raziel granted his prayer but told him that he would not involve himself with them any further.[3] He gave Jonathan the Mortal Instruments and mixed his blood with Jonathan's blood in the Mortal Cup to use for the creation of a new race of demon-fighters.[1]

Raziel had Jonathan to drink from the Cup and, upon doing so, Jonathan became the first of the Nephilim. Through this ritual, all Nephilim have a bit of Raziel's blood running through their veins. Raziel gave Jonathan the fitting name "Shadowhunter" as a symbol of his transformation and allowed him to use the Mortal Cup to create more Nephilim, all of whom, with the help of the Mortal Instruments, would be dedicated to the eradication of demons on Earth. Raziel also gave him the book of the Covenant, in which he inscribed Marks for their kind to use.

Late in 2007, a summoning ritual was planned and arranged by Valentine Morgenstern in order to summon and compel Raziel into granting his wish: a new race of Shadowhunters, to replace those Valentine believed to be corrupt, who would be dedicated to the destruction of both demons and Downworlders. However, unbeknownst to Valentine, Clary Fairchild had secretly modified one of the runes in the protection circle in order to change Valentine's name to hers. As a result, Valentine no longer had the power to compel Raziel to fulfill his wish and was given no protection from Raziel's wrath for being summoned to Earth.

During the course of their conversation, Raziel made it clear that he did not agree with Valentine's ideals, because he could see that Valentine cared only for his own glory and had no genuine interest in protecting the world. So appalled at what Valentine had done in the name of his cause—including experimenting on his own children, killing his adopted son, and torturing Raziel's angelic brother Ithuriel for years—Raziel furiously shot Valentine with a flaming arrow through his chest, killing him instantly. Because of the conditions of the summoning, Raziel was obliged to carry out a wish for Clary, so she asked Raziel to resurrect Jace Herondale, who had just been killed by Valentine as a blood sacrifice to complete the summoning. Raziel granted the request.[3]

Only months after being summoned by Valentine, Raziel was again summoned to Earth—this time, by Simon Lewis, with the help of Magnus Bane, as part of their quest to find a way to sever the demonic twinning bond between Jace and Sebastian Morgenstern. Magnus was initially skeptical about summoning Raziel, given angels' impatience and the possibility that Raziel would kill the summoner if he was not summoned with all of the Mortal Instruments as protection against them. However, since Simon's Mark of Cain granted him invulnerability, Simon opted to be the one to summon the angel.

Raziel was furious for being summoned, as expected—even by Simon, who, being Jewish, carried the blood and faith of his descendants, the Maccabees—and had intended to kill Simon the moment he arrived. When he realized that Simon had the Mark of Cain on him, he was even more outraged because the Mark was meant to be placed upon man by God; he believed it was blasphemous that anyone else had done it. However, they ultimately agreed upon a compromise due to the extreme circumstances: Raziel would strip the Mark from Simon's body, and would not kill Simon after doing so, in exchange for the sought after weapon. Raziel did so and loaned Simon the sword of St. Michael, "Glorious".[4]

Raziel is human-like in figure, but so large that he can cradle three grown men in his palms. He has long silver and gold hair. His eyes are also gold with no whites or pupils. His white skin is covered in golden angelic Marks—both those familiar and unfamiliar (those not found in the Gray Book)—all of which move across his skin. As an angel, he has large golden wings, each feather of which contains a single golden staring eye. His face was described as both beautiful and inhuman. 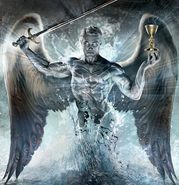 Raziel on The Codex

Raziel (Hebrew: רזיאל) is an Aramaic name meaning "God is my secret", or "Secret of God".

Raziel is based the archangel Raziel within the teachings of Jewish mysticism.[1]