Before becoming the first of his kind, Jonathan was a Crusader born in the 11th Century. It was during this time that demons were swarming into Earth from the Void. On his way to Constantinople, he asked a warlock to summon the angel Raziel to Lake Lyn. When Raziel arrived, Jonathan begged him to mix his blood in a cup with that of man to create a race of demon fighters. Raziel, seeing that Jonathan's intentions and vision of the world free of demons was a desire for good, granted this request.

After the summoning, Jonathan was given the Mortal Instruments. He created the new race of demon-fighting humans, Nephilim, and formed the Clave.

Jonathan then transformed his sister, Abigail, and his friend, David, into Shadowhunters. Inspired by the tale of their coincidental biblical namesakes, Jonathan and David took that story and became the first parabatai, performing a ritual where they took each other's blood, spoke the oath, and inscribed the runes upon each other. They then codified this ceremony into the Law. This bond was later broken when David took the Marks to become the first Silent Brother.[1]

In the demon world Edom, ruled by Asmodeus, an alternate version of Jonathan Shadowhunter and his brethren lost the war against demons. According to Asmodeus, the Jonathan of that world was a divider, as opposed to the one in Clary's world, who was a uniter. He also presumably became proud during the days before their defeat, having had a statue erected in the Accords Hall that depicted him as the "First and Last of the Nephilim". He believed that the skeptron, the primary weapon of the Nephilim in Edom, would also allow him to rule the world.[2]

Statue of an alternate version of Jonathan in Edom 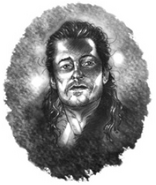 Illustration from the Shadowhunter's Codex