Jaime Rocío Rosales is a Shadowhunter from Mexico, D.F. He is the younger brother of Diego Rosales and is a distant relative of Cristina and Tomás Rosales.

Jaime and Cristina had been friends since they were young. Eventually, they decided that they would someday to become parabatai.[1]

When the Cold Peace began, the Rosales families were told to surrender a powerful heirloom, among other gifts from their hadas, or faerie, connections, to the Clave, particularly as the Dearborns and the Cohort began to demand it. Instead of turning the heirloom over directly, they falsely told them that only a Rosales could make the object work.

Through all this, what Jaime wanted most in the world was to bring honor back to his family.[2] In May 2012, he and Diego were at the Rosales residence at San Miguel de Allende with Cristina. While drunk, Jaime told Diego of his intentions with Cristina: how he intended to use their shared influence on her and her mother—with Diego as her future husband and him as her parabatai—to gain control over the D.F. Institute, believing that the wrong branch of the Rosales family was in power. He went as far as telling Diego that he was stuck with the harder position as being parabatai with Cristina would mean they are stuck forever.

Since Jaime planned to go to Idris, Diego meant to warn Cristina about him but never had the chance as she had already overheard Jaime's rants. Heartbroken, she left and moved to Los Angeles. Despite his drunken ramblings, he, according to Diego, still panicked when Cristina left. Also according to Diego, he only said those things because he had been drunk.[1]

With Cristina and their strongest connection to the D.F. Institute gone, they became more pressured to give or hide their heirloom. To delay the Dearborns' demands for the heirloom, Diego tied himself to the Cohort in an arranged marriage to Zara Dearborn, while Jaime took the heirloom and went into hiding.[2]

Jaime, who had been missing and unreachable for months, snuck into the London Institute after hearing Cristina was taking refuge there. He was discovered by Dru Blackthorn, who immediately developed a crush on him. He told her that he was there to see Cristina, but she couldn't know he was there yet. Jaime began hiding in Dru's room to avoid being discovered by the other inhabitants of the institute. His trust and reliance on Dru, as well as his charm, made her feel special.

Eventually, Jaime spoke to Cristina. He delivered a letter to her from Diego and explained to her his situation and tried to explain as much as he could why he'd said the words that hurt Cristina. He also told her to send him a fire-message if a fight against the Cohort came because he wanted to participate. Jaime refused to tell her where he was headed next and asked her not to tell anyone he was ever there.

After he met with Cristina, Dru curiously looked at the contents of his bag and accidentally touched the heirloom and she was transported to a room in the Unseelie Lands. During that short time, Jaime gathered his things and left her room. He was gone by the next morning, but not before leaving a farewell gift for Dru in the form of a gold Rosales hunting dagger with a thank you note.[2]

Cristina reached out to Jaime not long after, asking for his help. When he arrived at the Los Angeles Institute, he went to see Dru on the beach first before going inside. Cristina explained that they needed the Eternidad he had been protecting in order to rescue Julian Blackthorn and Emma Carstairs. He allowed her to take it and after they left he prepared to leave the Institute. While Dru and Helen tried to convince him to stay for dinner, a fire-message arrived announcing The Registry and Diego's arrest. Jaime left quickly to try to break his brother out of jail.

Jaime was captured and contained in Idris where he was beaten and severely injured by Cohort members. His brother, Diego, was also contained for housing the Unseelie prince, Kieran. Jaime's wound on the arm became infected and his condition worsened over time. Diego begged the Cohort to give him medicine or a stele to draw a healing rune, to no avail. Eventually, Anush Joshi, who was in charge of bringing them food as punishment for abandoning his teammates on a mission, realized the error of the Cohort's ways and secretly tucked a stele and gave it to Diego. Jaime was soon healed and then they escaped.

During The Cohort's parley, Jaime joined Livia's Watch to fight against the Cohort. He later helped Dru get onto the Imperishable Fields to meet with her family and helped them get to Julian and Emma, who had become True Nephilim. On the way he spotted his brother's limp body being dragged by a redcap, to which he quickly dispatched and saved and healed his brother.

A few weeks later he attended a party on the beach in Los Angeles that later turned into Magnus Bane and Alec Lightwood's wedding. There he approached Dru and tried to make polite conversation, asking if she would be attending the new Academy. When Dru asked if she'd see him again, he confessed it was not likely as he needed to return home and fix things with his father and the rest of his family.[3]

Jaime is warlike and fierce, more so than his brother, Diego, for which he sacrifices a bit of his grace. He was also troublesome, often getting his brother in trouble for his actions.[1] He has a restless and mischievous spirit, playful where Diego is serious. He plays devil's advocate in arguments. Jaime was also secretive, often disappearing for long periods of time without saying where he was going.[4]

He has a strong accent—stronger than that of Cristina's or Diego's.

Jaime is tall and rangy, his months on the run making him even thinner. He has black hair, typically untidy, brown skin, brown eyes, and long, black lashes. Aside from his Marks, Jaime is also covered in tattoos. He has sharp features, a slightly big nose, and a wide mouth. Despite apparently not being as handsome as his "perfect" brother at first glance, it is highly subjective, and his charm may easily change one's opinion about his looks in comparison to Diego.

Diego is Jaime's older brother whom he is quite close to. As children, Diego was afraid that because of his little legs, three-year-old Jaime would miss out on seeing everything in the world Diego wanted him to see, and took to carrying him everywhere. As they grew older, Diego became even more protective of his brother and always took care of him.[3]

After the Cold Peace, the Rosales family was meant to turn over all their possessions related to the fey. The two made plans to protect the Eternidad from falling into the wrong hands—specifically the Cohort—with Diego getting engaged to Zara Dearborn and Jaime taking the heirloom into hiding with him.

After Diego was arrested for helping Kieran escape, Jaime came to liberate him, but was severely beaten up and thrown into Diego's cell. When Jaime's injuries became infected, Diego pleaded with the Cohort for a stele so that he could heal his brother, to no avail till Anush Joshi, eventually, slipped him a stele while delivering their food. Later, during the battle at the Cohort's parley, Diego was attacked by a redcap and Jaime saved him. When he woke up, Diego tried to insist that he would go on fighting, but Jaime refused; Diego soon relented and let his brother take care of him.

Jaime and Cristina have known each other since they were children. They were so close that the pair made plans to become parabatai. However, one day, Jaime—in a drunken state—suggested that he was only after a connection to Cristina's family for power. Though Jaime was supposedly upset when Cristina fled Mexico, he never tried to reach out to her.

Months later, Jaime snuck into the London Institute after hearing Cristina was taking refuge there to speak with her. He tried to explain to Cristina why he'd said what he had and to make amends. Before he left, he requested that she send him a fire-message if a fight against the Cohort came because he wanted to participate.

Cristina reached out to Jaime for his help not long after, asking for use of the Eternidad in order to rescue Julian Blackthorn and Emma Carstairs. He trusted her enough to allow her to take it. He later joined her in Livia's Watch to battle against the Cohort. After their exile, the pair fully resumed their friendship and Jaime even let her keep the Eternidad in her possession from then on.

Jaime and Dru first met at the London Institute, where she found him breaking in and looking for Cristina. Jaime went on to tell Dru that he needed to see Cristina but couldn't be seen just yet. Pleased that someone trusted her enough to confide in her, Dru hid him in her room and brought food up to him. The two formed a friendship; talking about their families, playing cards, and even bonding over horror movies. When he left, he left her a thank you note and a golden Rosales hunting dagger.

When he was called to the Los Angeles Institute by Cristina, Jaime visited Dru first. Though this led to him facing her brother's wrath—having assumed he had romantic or sexual intentions with his little sister. It was then that he realized she was not his age as he had believed, but actually 13. He then became very uncomfortable and awkward around her, especially taking into consideration her obvious crush on him. Later on, Dru decided not to try to pursue his friendship as he clearly saw her as a child now.

At Magnus Bane and Alec Lightwood's wedding, Jaime approached Dru and tried to make conversation with her, asking if she would be attending the new Academy. When Dru asked if she'd see him again, he confessed it was not likely seeing as he had no reason to come back since Cristina was leaving. 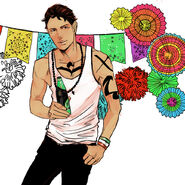 Jaime is the Spanish and Portuguese form of the name James, as well as Jacob, Jamie, or Jacques. James, in turn, is the English form of the Late Latin name Iacomus which was derived from Ιακωβος (Iakobos), the New Testament Greek form of the Hebrew name Ya'aqov (Jacob).[7] Jaime is also a Scottish and American name, where, as well as in Spanish, it may mean "supplanter; he that replaces".[8]

His maternal surname Rosales was derived from the Latin word "rosa" and is the plural form of the Spanish word "rosal", both of which mean "rosebush".[9] His paternal surname Rocío is of both Italian and Spanish origin, where it means "dewdrops", or simply "dew".[10][11][12]