Imogen Herondale was the Inquisitor of the Clave for years before her death in 2007. She is also the paternal grandmother of Jace.

Imogen was born to the Whitelaw family. At some point, she met and fell in love with Marcus Herondale, whom she later married. The two went on to run the London Institute together. Eventually, the couple had a son, Stephen, whom she loved deeply. They raised and trained him in London before they moved to Idris.

Stephen eventually joined the Circle, to Imogen's severe disapproval. When Stephen was killed during a Circle raid, Imogen was devastated, even more so when her husband, Marcus, died shortly after. Imogen became hardened and cold, a toughness that carried on when she accepted the coveted Inquisitor position. While generally judicious and lawful when it came to the Covenant, she still sought justice for her son's death and ruthlessly hunted down the former Circle members, brutally punishing those she could.

Even years after Stephen's death, Imogen held a grudge and deep hatred towards Valentine Morgenstern, the man whom she believed poisoned Stephen's mind and caused his death. When she found out that Valentine's son was alive and had in fact been at the New York Institute all along, she responded and went to New York to investigate.

Inquisitor Herondale truly wanted to believe that Jace was in fact in league with Valentine and had already made up her mind about him even before they met, if only to have an excuse to vent her anger and bitterness towards the boy. Hence, she became very determined to decipher and reveal his betrayal and true allegiance. Jace's abrasive nature did nothing to pacify the authoritarian Imogen, who had Jace imprisoned in the Silent City for being insolent toward her.

Throughout her investigation, Imogen bullied and asserted her power over the Lightwoods, insisting that Jace was a traitor to them, and particularly treating Maryse Lightwood with disdain, and dismissing her husband, Robert, and their children, Alec, Isabelle, and Max as beneath contempt, because of their connection to the Circle.

When the Mortal Sword was stolen from the Silent City during Jace's imprisonment there, Imogen became even more convinced of Jace's affiliation with Valentine. Upon his release, Imogen kept him trapped within a Malachi Configuration. Consumed by hatred and rage for Valentine, Imogen briefly lost sight of justice and fairness by hatching a plan with the Clave that endangered Jace's life, thinking Valentine, being a parent like her, would be humbled into doing anything for his child, just as she would. They relayed a message to Valentine, telling him that they will trade Jace in exchange for the Sword and the Cup.

When Valentine, projected while they discussed their deal, easily refused and told her that Jace wanted nothing to do with him, a horrified Imogen finally realized her mistake too late.

Realizing her mistake, Imogen immediately called the Conclave for backup, atoning for her faults by joining the Lightwoods in their siege on Valentine's ship. During the battle against demons that ensued, she took Jace aside to personally apologize to him, placing both of them within a protective barrier while they spoke. When she saw Jace's birthmark, a star-shaped scar possessed by all Herondale men, she realized that Jace was, in fact, Stephen's son—her grandson.

When Imogen, still in shock, wondered aloud how long Jace believed himself to be Michael Wayland's son, Jace frustratingly defended himself before walking away and out of their protective circle, bearing no weapons. As Imogen worriedly tried to call Jace back, a demon attacked. Desperate, Imogen threw herself between them and took the demon's poison, sacrificing herself for her grandson.[1] She whispered her last words to Jace, telling him that his father, referring to Stephen, would have been proud of him, surprising Jace, who assumed she meant Valentine.[2] She died in Jace's arms, before she could tell him his true lineage.

The personification of unpleasant adult authority, Imogen, to those who did not know her, seemed like a sadist and a domineering figure who relished the power her position gave her. A fierce enforcer of the Law, Imogen was single-minded and focused, qualities which are merely demonstrations of her devotion to the Clave and the Law. Imogen deeply loved her family, so their loss broke her. Years of grief and seclusion brought out the worst in her, leaving a harshly direct and hostile woman, a shell of who she once was, dedicating her whole life to her work, which she took seriously.

Despite already having been flinty and impatient, Imogen had several considerably surprising hobbies, including watercolor painting, poison-mixing, darts, and classical piano.[3] 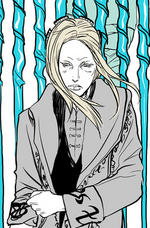 Imogen had dull pale, almost colorless, blond hair and gray eyes. As the Inquisitor, she often wore her hair in a tight bun, adding to her stern, intimidating and harsh demeanor. She also wore a suit, and a long, old-fashioned dark gray cloak over it. 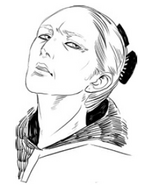 Imogen means 'maiden' in Celtic; it is also the name of a British princess in the Shakespearean play, Cymbeline.