Hodge Starkweather was a tutor at the New York Institute, cursed so that he could never leave the area for being a member of Valentine Morgenstern's notorious Circle up until the Uprising.

Hodge Starkweather was born to a poor, isolated family in the countryside of Idris. As a child, he was often left to his own devices, so he would roam the fields and forests. He had been interested in plants and animals, and he became a skilled herbalist and spent some time in an apothecary in his youth.[2]

Hodge had to go to great lengths to convince his parents to allow him to attend Shadowhunter Academy.[2] He became a loner during his time there. In his youth, Hodge had considered possibly joining the Silent Brotherhood someday. When Valentine came to him, offering to train and befriend him, the very young Hodge eagerly accepted and joined the Circle. As one of the founding members, Hodge helped write the Circle's loyalty oath.

At one point, Hodge took the child Valentine had been experimenting on from the womb of Céline Herondale, whom he had murdered. His loyalty unwavering at the time, Hodge remained quiet about the whole thing and even agreed to look after the boy for a few days until Valentine could get things settled with him.

For years, Hodge was one of the many Shadowhunters whom Valentine had wrapped around his fingers. Hodge remained dedicated to him and, like all the other members, was told that he was his most trusted follower and closest lieutenant. However, Hodge claimed to have eventually realized how far Valentine had gone. Fearing Valentine's retribution, he did not leave.

Hodge took part in the Uprising, where he sustained a wound to one of his shoulders that was still sensitive sixteen years later. When the battle ended, Hodge was among those who stayed and surrendered to the Clave. As punishment, Hodge was exiled to New York, cursed to never be able to leave the grounds of the local Institute.

Forced to live out the rest of his life in the Institute, Hodge became the mentor, particularly their professor of history, of the Lightwoods children, whose parents were also banished from Idris, in the New York Institute. He also took control of Valentine's raven Hugin. When Jace arrived at the Institute, Hodge received a letter from Valentine through Hugin, telling Hodge that 'Jonathan' was his son. However, Hodge was unsure of his true identity, of whether he was Valentine's biological or adopted son.

While Hodge did grow to love the children he tutored, namely Alec, Isabelle, and Jace, Hodge still felt the weight of his punishment. The Lightwoods and Hodge never told the children about their involvement with the Circle, and he had simply allowed them to assume that he was bound within the Institute because of a vengeance spell cast by an angry demon or warlock.[3] Hodge also never truly felt at home at the Institute, and while the children trusted him, others did not. Still, Hodge bid his time and contemplated his options in his life. Regretfully, he knew that Valentine would one day return, and that if Valentine offered him his freedom, he would take it and would even consider rejoining him, if only to once again become a Shadowhunter.[4]

He was proven true when, at one point, Hodge learned of Valentine's return and presence in New York. No longer able to help himself, he sent Valentine a message and negotiated for his freedom.[5]

Though slightly skeptical, he ultimately betrayed them by giving Valentine the Mortal Cup and was subsequently freed from his binding curse. Hodge fled the Institute, and Clary pursued. After a quick chase, Clary managed to corner Hodge, but to no avail. Hodge attempted to kill Clary with his weapon of choice - the chakrams - and was stopped by Luke, before he could hurt her. After taking a blow from Luke (who appeared as a wolf at the time), Luke thought that he may have nicked a rib and when he came back for Hodge's body, he was gone. They assumed that he was strong enough to drag himself away.[5]

Hodge had hoped to be accepted back by Valentine, to at least feel that he has a purpose. Instead, Valentine simply dismissed him after giving Hodge his promised freedom, leaving him without anywhere to turn to. This then became the impetus that convinced Hodge to attempt to inform the Clave of Valentine's plans.

He went to Alicante at one point to try to warn the Clave about Valentine. They did not believe him and he was imprisoned at the Gard. There, he introduced himself as Samuel Blackburn to Simon, who was imprisoned by Inquisitor Aldertree in the next cell, telling him a slightly fabricated story about his allegiance to Valentine. However he was forced to reveal himself to Jace and the others when they arrived to rescue Simon. They were shocked when they realize who he is, but he told them about Valentine's plans with the Mortal Instruments and that Lake Lyn was the Mortal Mirror. Sebastian overheard this and killed him afterwards. He tried to tell Jace that he wasn't Valentine's son, but died before he could.[4]

Hodge was a man of intellect. He spent much of his time reading and learning. He was also a determined individual; when he was cursed, he spent sixteen years looking for a way to free himself, despite knowing what it might cost him. He was shaped by those around him. He had known Valentine, whose influence had rubbed off on the young Hodge, making him more manipulative and secretive when the situation called for it.

Exiled and banned from Idris, cursed never to leave the New York Institute, Hodge grew bitter about the fact that his former fellow Circle members Robert and Maryse Lightwood were not punished the same way, leading him to again help aid Valentine by retrieving the Mortal Cup for him in exchange for his freedom, which had become his driving force for much of his time at the Institute.

Despite Hodge's many negative traits, he did care for the Lightwoods and Jace, all of whom he had spent years with. Even as he betrayed the Clave, Hodge did everything in his power to save Alec's life. He was also never sure if Jace really was Valentine's or Céline's son, so he just did his best to raise into as good a person he could make him. In the end, he went to Idris to warn the Clave of the attack that Valentine planned, yet they imprisoned him and ignored his warnings.

He has a thick scar up the right side of his face. Hodge was thin and had a long beaky nose. To Clary, he seemed ageless, despite appearing older than he was due his black, gray-streaked hair—brought on at a young age presumably due to his long years of confinement within the Institute, and the grief of it. Hodge often wore neat, sharp tweed suits. 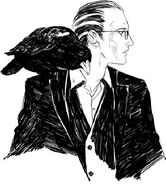