Leader of the Wild Hunt

Gwyn ap Nudd is the leader of the Wild Hunt and a Welsh mythological figure.

Gwyn has led the Wild Hunt for centuries. As leader of the Hunt, it was his blood that new recruits were forced to drink as part of their initiation.[1]

After the capture of the half-Shadowhunter, half-faerie Mark Blackthorn, he was surrendered to Gwyn. He then claimed the boy and made him a Hunter. Seen as a gift from the Queen of the Seelie Court and Sebastian Morgenstern, Gwyn ap Nudd met with the Queen to quickly return the favor.

When asked about the gathering of the dead from a recent battle on Adamant Citadel, Gwyn told her that they did not wish to involve themselves with the battle of the Nephilim and the Endarkened, the angels and demons, much to the Queen's disappointment. When the Queen asked for his advice and aid in the battle as compensation for the boy, apparently rare and could instill fear among demons, Gwyn insisted that he did not need the boy to cause fear and that the boy was not worth such trouble as risking involvement with war. So instead, the Queen just asked him to have the Hunters gather the dead after the battle in Alicante, to which Gwyn hesitantly agreed to. They were interrupted by the Queen's knight Meliorn, and he left.[2]

When faeries began to get murdered by a then unidentified group, the murders connected to a series of mundane deaths, the Unseelie Court launched an investigation into it. Iarlath was able to convince someone of power to let Gwyn relinquish one of his hunters, Mark Blackthorn, back to his family to make the Shadowhunters secretly investigate for them, despite the Cold Peace.

During a conversation with Cristina Rosales, Mark casually mentioned Gwyn's weakness—his cloak—a secret that Mark, as a member of the Hunt, was not allowed to ever divulge to anyone. His faerie lover Kieran overheard this and, in an attempt to get him back, told Iarlath. Gwyn, Iarlath, and Kieran came to the Institute shortly after for his punishment: twenty lashes. Gwyn expressed his regret for the nature of his visit but explained that it was necessary because Mark broke one of their oldest laws.

Throughout, Gwyn remained patient as the Shadowhunters continued to object to the whippings and when Julian volunteered in Mark's place. When Julian's parabatai Emma felt the pain he was experiencing, Gwyn understood and silenced Iarlath when he complained about Emma's screaming. Gwyn ordered Iarlath to stop and allowed Emma to heal Julian, and was visibly saddened when Emma, after knocking Jules out with a rune, insisted on taking the whipping herself.[1]

A few weeks after the defeat of Malcolm Fade, revealed to be the Guardian behind the deaths of mundanes and fey, Gwyn found out that Kieran was facing execution at the Unseelie Court for murdering Iarlath. Sworn with the Hunt to not interfere, he rode to the LA Institute to ask Mark to rescue Kieran. There, he met Diana Wrayburn and was immediately enamored with her. Mark refused Gwyn's request, much to his disappointment, though Mark decided otherwise later that night. Gwyn also left an acorn for Diana as a means to summon him.

Shortly after, Gwyn arrived at the Seelie Court to take the Shadowhunters and the rescued Kieran to the London Institute, pleased that Mark decided to save him after all. Upon arrival at the Institute, Gwyn asked Diana if he could court her, awkwardly suggesting a few faerie pastimes. Diana politely refused his offers and suggested a normal dinner instead, delighting Gwyn and earning a round of applause from the Blackthorns.

Gwyn later visited Diana at her apartment in Idris and took her on a picnic in Brocelind Forest. They enjoyed themselves, finding each other easy to talk to, but the picnic was cut short when Diana noticed a blight in the center of the forest.

When the Unseelie King sent the Seven Riders after the Blackthorns, Mark used Diana's acorn to summon Gwyn and asked him to find his siblings. Gwyn was annoyed that the acorn was used by Mark, but promised to try after a little encouragement and flattery. Along with Diana, he managed to find and rescue Ty, Livvy, and Kit from the Riders and rode back with Diana to Alicante.

Diana bandaged his wounds received from the Riders, and he questioned her unwillingness to run the Los Angeles Institute. She explained that an interview was needed to become a Head, and revealed to Gwyn her greatest secret: that she had been born David Wrayburn and used mundane medicine to change her gender. Gwyn called Diana the bravest woman he'd ever met and asked to hold her, which she let him.[3]

Diana and Gwyn's relationship began to grow from there. They began meeting fairly regularly at the same spot in the forest, though he'd typically pick her up at her window. On one of these meetings, Diana asked what his steed's name was and then offered to name him Orion. Gwyn was pleased to have a steed named by her. Diana even began teaching him things of the modern world: like why it is wrong to have 8 year olds in the Hunt and battles.

At one of their meetings the Consul, Jia Penhallow, joined them to discuss what had happened to Julian and Emma. During this meeting, the Cohort arrived to arrest them for conspiring with Downworlders. Gwyn threw his axe at them, perceiving them as a threat rather than children, and scaring Anush Joshi off. Diana then quickly asked him to leave and begrudgingly he did. Diana was taken to meet with Horace Dearborn following her arrest, she attempted to flee out the window and over the roofs. Luckily Gwyn had stayed nearby and caught her up; the pair then went by the Los Angeles Institute to tell them what was happening before leaving to hide out on their own.

Gwyn was soon requested—as a favor by Kieran—to collect water from Lake Lyn and distribute it, with the help of the rest of the Hunt, to warlocks around the world and the known patches of blight to cure them. Upon returning, Gwyn suggested that Kieran take Unseelie throne over his brother Oban who had stolen the claim to it. Though Kieran denied it, he later came to agree with him.

The following day, Gwyn was called by Diana to attend Julian's war council and he and the Hunt joined Livia's Watch. At the Cohort's parley, he mainly flew low overhead with Diana on Orion's back slashing at the foes below. After Oban was killed, he and Diana began spreading the message to the melee that Kieran was now the Unseelie King. Later on, after Julian and Emma rose up as True Nephilim, Gwyn helped clear the path for the Blackthorns to stand before them and try to talk them down.

A few weeks later he went to a party on the beach that became Magnus Bane and Alec Lightwood's wedding ceremony. He and Diana mostly sat off to the side, cuddling on his cloak which was being used as a beach blanket, expressing sentiments of happiness and love.[4]

Unlike many of his kind, Gwyn is honorable, kind, compassionate, and charming.[1][3] Nonetheless, he is still capable of ruthlessness as required by his position, especially to his Hunters.[2][1] Gwyn is also slightly distant from his warriors and has mysterious intentions.[5] A somewhat secret side to Gwyn is his being a romantic; Gwyn has formed his own notions about love in his long life, albeit being slightly awkward in his approach.[3]

Gwyn is a big, broad man with a bearded, square chin, broad cheekbones, wide eyes, and wicked eyebrows. As is typical with members of the Wild Hunt, he also has heterochromia iridum; one of his eyes is black, and the other is a very pale blue. 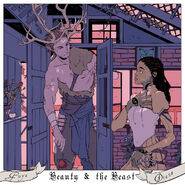