(According to a family tree):

(According to a family tree):

After her parents' death when she was eight years old, Grace was adopted by Tatiana Blackthorn, to whom she became very loyal and devoted. Grace also grew to have unearthly beauty and was implied to have possessed siren-like abilities, both of which were exploited by her adoptive mother. Despite the seemingly cold persona Grace eventually developed, she loved her adoptive brother, Jesse.

After his rune ceremony, Grace heard Jesse screaming from her room and came running to him. She was hysterical as blood swelled from his fevered skin and he writhed over the bed. As he weakened and shivered, Grace held her brother in her arms until he took his last breath. As her mother had Jesse's body preserved with the intention to resurrect him, he later appeared to the two of them as a ghost. Though he could only come at nighttime, the two remained close and often spent time together.

At some point, Grace became aware of her mother dealing with powerful demons in order to bring back Jesse. Though she did not know the full extent of her plans, she went along with her mother's wishes.

Grace met James Herondale for the first time in 1899. James's family had been staying in Herondale manor for the summer and Tatiana hired him to trim the briars around her property. Grace supplied him with better cutters than the knife he was given and the two began a sort of friendship; talking daily when he came to cut or meeting in the forest.

The following summer when his family returned, they continued meeting up to chat and exchange stories of their lives. Eventually, she confided to him that she had nothing of her mother's besides a bracelet that Tatiana kept from her. As Tatiana instructed, Grace asked James to use his shadow magic to steal it back for her. Once he had retrieved it, she asked him to wear it as a token of their friendship, which he agreed to do. Now with the enchanted bracelet on, Grace's siren-like abilities were able to work on him, whereas before they couldn't because of his demonic blood.

For the next few years, she made James believe he was in love with her. They constantly exchanged letters throughout the year and then would spend their summers together. They came to have a secret understanding that one day, when they were old enough and she was free of Tatiana, they would get married.[3] However, it wasn't all niceties. She would also test and torment him by saying she wished to end things, which drove him down self-destructive paths.

After one such time in 1903, Magnus Bane was called to the Blackthorn Hall to perform a task for Tatiana that would lead to Jesse's resurrection. After Magnus refused to perform the ritual, Grace followed him out. Magnus asked her if she needed help or was being held against her will; to which Grace responded by holding a blade to his chest and coldly refusing him, followed by threatening him should he reveal her mother's plans. Magnus then mentioned James, whom he had rescued earlier in the night after Grace had told him she did not want to talk to him anymore. Grace answered him with indifference saying she did not care for him and that "a blade does not care" where it is pointed.[4]

At the end of that summer, Tatiana and Grace moved permanently from Idris to London. They moved back to Chiswick manor, where Tatiana lost her husband and father and began integrating back into Shadowhunter society. They attended the welcome party at the London Institute for the Carstairs family and Grace even joined the younger set at a picnic the next day.

At the picnic, Grace began to notice the effects of the bracelet and her power weren't working. She could tell James felt a wrongness in kissing her and was able to resist it. So she sent a letter to James requesting they meet the following night. There she asked him to run away with her and elope. When James refused, she tried to guilt him into it, claiming he forgot her and she should be the most important thing if he truly loved her. However, when he refused once again, she said she needed time to think and left with her mother who had arrived to fetch her.

The next day, Grace brought her mother to the Institute for treatment after Tatiana was attacked and poisoned by Khora demons. It was there she told James about her engagement to Charles Fairchild, much to James's shock since Charles was already engaged to Ariadne Bridgestock. With her mother unconscious, she felt she needed to act fast and she needed his power and position within the Clave to get her out of Tatiana's grasp. Though James tried to change her mind, Grace knew she was doing him a kindness and—having decided it was no longer working—she asked James to return her bracelet.

Some days later, while in the garden talking to Jesse's coffin, she was attacked by Namtar. The demon told her he had been sent by Belial to reprimand her for taking the enchantment off of James as it was not her decision to make. When she tried to explain that it was not working, he simply told her he would see to its strengthening and that she was to put it back under the threat of destroying Jesse's chance to be brought back to life. Before she could respond Lucie Herondale fell from above and attacked the demon. When Jesse came to their rescue and slayed the demon, Grace learned that Lucie could also see him. While Grace tried not to say anything incriminating of Tatiana in front of her, Jesse expressed that he trusted Lucie and she should as well.

Over the course of the next few days, Grace and Jesse began to realize how dark their mother's plans were and just how mad she had become. The two began to discuss how they could help her receive the help she needed.

However, she could not ignore Namtar's warning and paid James a visit to return the bracelet. It had indeed been strengthened and James returned to his complacent smitten state. She then asked James to destroy the clockwork automaton Tatiana had stored inside Blackthorn manor in Idris, which led to a fire that burned the entire building down.

At the Enclave meeting the following day, Tatiana accused him of burning Blackthorn manor down and consorting with demons. She called on Grace to give testimony, claiming James had told her all about it. Grace struggled to confirm her mother's story and was cut off by Cordelia Carstairs giving him an alibi, which Grace supported. When Tatiana was confronted for the dark magic items found in the rubble of the manor, she began screaming and crying for help from Grace. To which Grace simply put a hand on her shoulder for comfort.

After her mother's arrest, Grace moved in with the Bridgestock family until such a time as she and Charles were wed and could live together. She planned to still return to Blackthorn Hall to check on Jesse.

She then attended James and Cordelia's engagement party, where Charles officially announced his engagement to Grace. At one point she tried to convince James that they could be together in a year, after his marriage blanc with Cordelia was over, but he would not discuss it and told her they could not talk. She later had a conversation with Lucie about Jesse and her plans to resurrect him with or without his consent.[3]

Grace is seemingly a cold and unfeeling person. While she is able to appear charming and seductive when she has to and can display an air of innocence, she betrays no true emotions. Due to her upbringing and the outlook of the woman who raised her, any conscience Grace may hold seems restrained. Nonetheless, she is extremely loyal to her adoptive family.[4]

Tatiana is Grace's adoptive mother. Grace is very grateful to Tatiana for giving her a home and a family and as such, she does whatever she wishes. However, Grace is still anxious to free herself from her mother's control and physical abuse.[7]

Jesse is Grace's adoptive brother and perhaps the only person Grace truly cares for. When Jesse was dying after his rune ceremony, Grace held him in her arms until he took his last breath.

When he returned as a ghost, the two talked often but Grace began keeping things from him. She never really talked to him of James and tried to shield him from knowing all the dark dealings Tatiana had taken in an effort to resurrect him.

Grace and James first met in Idris in 1899, when Tatiana asked him to cut the briars of their home. Grace supplied him with better cutters than the knife he was given and the two began a sort of friendship—talking daily when he came to cut or meeting in the forest.

The next summer, under Tatiana's orders, Grace asked James to use his shadow magic to steal a bracelet back for her. When he did, she asked him to wear it, as her only friend and he agreed. The bracelet—being enchanted as it was—allowed her siren-like abilities to work on him and she made him believe he was in love with her; whereas in the past, Belial's blood prevented it. Over the years, they exchanged hundreds of letters and spent their summers together in the forest. Eventually, they came to have an understanding with one another.

When she moved to London, Grace realized the bracelet's effects were fading. As a test, she asked James to run away with her and elope. When he refused and Tatiana fell ill, she decided to remove the bracelet altogether, ending their arrangement and freeing James. However, her act of kindness was short-lived. Namtar soon attacked her as a messenger for Belial and demanded she replace the bracelet and that he would see to its strengthening.

Not long after it was put back on, James entered a marriage blanc with Cordelia Carstairs. When Grace tried to convince James that they could be together afterward, he told her they should no longer talk. 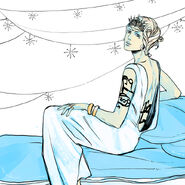 Silhouette from collector's first editions of Chain of Iron