Ghosts of the Shadow Market: An Anthology of Tales is a compilation of novellas by Cassandra Clare, Maureen Johnson, Robin Wasserman, Sarah Rees Brennan, and Kelly Link. It is comprised of 10 short stories: the first eight were published in e-book format from April 2018 monthly, and the last two stories were published exclusively in the print edition that was released on June 4, 2019.

The stories center on the Shadow Markets of the Shadow World, with all the stories featuring Jem Carstairs but each installment focusing on a different character.

The Shadow Market is a meeting point for faeries, werewolves, warlocks and vampires. There the Downworlders buy and sell magical objects, make dark bargains, and whisper secrets they do not want the Nephilim to know. Through two centuries, however, there has been a frequent visitor to the Shadow Market from the City of Bones, the very heart of the Shadowhunters. As a Silent Brother, Brother Zachariah is sworn keeper of the laws and lore of the Nephilim. But once he was a Shadowhunter called Jem Carstairs, and his love, then and always, is the warlock Tessa Gray.

Follow Brother Zachariah and see, against the backdrop of the Shadow Market’s dark dealings and festive celebrations, Anna Lightwood's first romance, Matthew Fairchild's great sin and Tessa Gray plunged into a world war. Valentine Morgenstern buys a soul at the Market and a young Jace Wayland's soul finds safe harbor. In the Market is hidden a lost heir and a beloved ghost, and no one can save you once you have traded away your heart. Not even Brother Zachariah...[1][2] 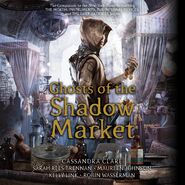 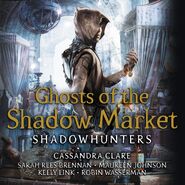 Russian cover, 2nd part
Add a photo to this gallery

Retrieved from "https://shadowhunters.fandom.com/wiki/Ghosts_of_the_Shadow_Market?oldid=166675"
Community content is available under CC-BY-SA unless otherwise noted.