Faeries, also known as the Fair Folk or fey, are an extremely cunning race of Downworlders.

Due to the legend of their origins, the faeries are associated with the beauty of angels and the viciousness and malevolence of demons. Like angels, they are the least understood of all magical people—the great ancient mystery in the Shadow World. Although they are widely believed to be hybrid descendants of demons and angels—something that their kind has seemingly not bothered to deny—faeries possess human souls just as other Downworlders do, and they are counted as members of the human race by the denizens of Heaven.[1]

The Fair Folk are known for their unearthly beauty, many faeries said to be extremely attractive with delicate and regal faces. Though they mostly resemble human beings, some have extraordinary features such as wings, horns, oddly colored-eyes or skin,[2] much like the marks of warlocks. A common aspect among them is their pointed ears. Faeries commonly incorporate flora and multiple forms of vegetation as part of their ensemble.

The gentry subdivision faeries are the knights, kings and queens, and court members; they are close to the monarchs and considered a part of the central Court society—gentry faeries are the ones that look human. The common folk are the other kinds of faeries, generally looking less like humans, such as nixies, pixies or piskies, brownies, selkies, satyrs, mermaids, kelpies, hobgoblins, and boggarts.[3][4][5]

As time typically flows differently for them and in their realm, they are very long-lived and become only more artful and powerful as they age, though they are not immortal.

They are known for their cunning and their cruel sense of humor, and they especially delight in tricking humans—both mundanes and Shadowhunters alike. They frequently seek to bargain with humans, offering someone their heart's desire but failing to mention that the desire comes with a terrible cost. They are committed to notions of honor and etiquette, and while faeries always exactly follow the letter of any promise they have made, they deliver these results with great irony and often use clever wordplay to their advantage in order to create loopholes.

The Fair Folk are also unable to lie. They might, however, tell what they believe is true, even if it is not. They may also expertly weave lies into sentences by using methods such as not telling the whole truth, letting others assume things, or not correcting the people with whom they're speaking; this does not, however, apply to half-fey, who can lie as easily as any other being.[6] Faeries are also capable of manipulating one another.[7][8] There have apparently been times when these either playful or serious manipulations, specifically resulting from problems or conflicts between rival courts, bleed into the world.[7]

Faeries, like vampires and werewolves, possess the unnatural abilities of swiftness, grace, and heightened senses of smell and hearing. The Faerie armies are also legendary in terms of their might in war, as evidenced by their role in the Dark War.

The magic of the fey is believed to be unique in the world. It is very old and powerful, but neither demonically nor seraphically aligned. They can harness the powers of the ley lines, along with other strange magics. The Faeries are older than the Accords, older than the Nephilim, and are said to even be the oldest among all races of Downworlders. They possess their own magic that the Gray Book can only partly and imperfectly protect against, at best; however, there does exist Nephilim Marks that protect Shadowhunters from faerie glamours for this very reason.[7]

Some faeries have the ability to send someone pleasant dreams; it is considered a faerie gift.[9]

Faeries have long life spans—longer than other mortals—and have the ability to choose when they die.[10] Based on the deaths of Auraline and Nerissa, it seems the fey often make this choice after having lost their love, no longer wishing to live without them.[10][11]

Though the fey are active members of the Downworld, faeries are generally removed from the affairs of the world. They usually keep to themselves and have their own complex politics and social structures within their own people.

Faeries are organized and classified into courts, specifically the Seelie and Unseelie Court, with sovereigns presiding over specific territories in the human world and in their own, such as the Seelie Queen ruling over the Seelie Court. The faeries, as individuals, are then further subdivided into gentry and common folk.[3]

There are just as many, if not more, free-ranging, or "wild", faeries in the world who are neither affiliated with any Court,[8] nor swear allegiance to any specific monarch; a famous example of which is the Wild Hunt.

The Fair Folk also has a somewhat difficult relationship with warlocks, particularly because they tend to look down upon warlocks for performing magic for money, while warlocks often scorn them for their inability to lie, their hidebound customs, and their penchant for pettily annoying mundanes.[6]

Faeries are signers of the Accords.

Before the Dark War, the Seelie knight Meliorn held a seat on the New Council as their representative, though he'd been placed there by the Queen for his convenient ability to be able to lie, owing to his half-fey heritage. For the war, however, the Queen decided to align the Court with Sebastian Morgenstern, resulting in many Shadowhunters resenting faeries in general, even the part-fey among them, including Mark and Helen Blackthorn.

In addition to receiving a set of sanctions and demands in exchange for a Cold Peace, they lost their seat on the Council and the protection afforded to them by the Accords.[6] Despite the lack of Unseelie involvement and representation during this time, they were treated with the same hostility, and the Unseelie King Arawn silently declared war on them, dedicating his time to developing ways to end their race. The alliance of faeries and several Shadowhunters against the Cohort and the King led to the end of the Cold Peace.[8]

The origin of faeries vary according to legends and is not wholly known. According to one, faeries are fallen angels, cast down out of Heaven for their pride.[12] Another states that faeries are born of the union of demons and angels, both of whom were present on Earth in the early beginnings of the planet's history. However, most known faeries nowadays are in fact the offspring of other faeries (just as most Shadowhunters are the offspring of other Shadowhunters and not born from the Mortal Cup), so how faeries were originally created is actually unknown.[13]

Faeries are capable of bearing children. However, they apparently do not reproduce often as it is very hard for them to get pregnant.[14][10]

A union between human and fey will result in a human offspring that may retain some faerie-like aspects or have a penchant for certain kinds of fey magic.[7] Additionally, the children of faeries and Shadowhunters will be Shadowhunters, though they, too, will often have some faerie-like physical attributes, such as pointed ears.

While most half-faeries would be primarily human, those who reside among faeries or in the Courts would have or develop stronger faerie qualities,[15] much like with changelings. Half-faeries tend to be affected less by faerie weaknesses: half-faeries are able to lie, and they are not typically hurt by things like rowan wood and pure iron outside of some minor irritation,[9] nor will their true faerie names hold any real power over them.[16][17]

Because of their isolation and extensive interbreeding, faeries risk the weakening of their family lines. For this reason, faeries sometimes lure humans into their world, typically by enticing adult humans into their revels or tricking them with faerie food. They would trap them with their faerie magic in their realm until they forget their former lives and "go native," or at least until they can be used to produce new faerie children.[7]

Another way to strengthen their bloodlines is by creating changelings—mundane children taken from their homes and replaced with a sickly faerie child. Changeling children they bring in mysteriously take on fey attributes and are able to perform some faerie magic, thus bringing fresh strong blood into the faerie lines. Meanwhile, the fey child left with the mundanes may continue to live on with the belief that they are mundanes, unaware of their true origin.

Taking in changelings is apparently a practice preferred over kidnapping adult humans, and thus the Nephilim do not interfere with this.[7]

Iron, particularly those merely wrought but yet to be heated and shaped, is toxic to faeries. Because of this, the term "cold iron" has been used to refer to the fey and the fact that iron is cold to the touch, which was at one time believed to be associated with its magical properties. Steel, an alloy of iron, is usually not toxic to faeries, as it is the purity of iron that grants its power over the fey,[7] though it does weaken them to some extent. They are also vulnerable to rowan wood, salt, and grave soil.[6]

While able to stand the presence and its touch, faeries are severely weakened and become ill if fooled into drinking holy water.[7]

Additionally, knowing a faerie's real name gives one power over them,[18][19] though this does not apply to part-fey.[17]

Faerieland, sometimes called the Faerie and the land under the hill is the territory of the Fair Folk, generally unwelcoming to outsiders. The food or drinks may trap people in the Faerie until dismissed by the Queen, which usually involves some form of trickery or bargain.

Though it is described as a realm and one can travel in it like in a country, it does not tolerate being surveyed and does not have a consistent layout. Time flows differently in the realm, sometimes slower, sometimes faster. Seasons can change in the blink of an eye, mountains and caverns can appear where minutes before no such things were visible, and its rivers change their courses at the whim of some unknown force. No map of Faerie has ever been produced.[7]

Faeries are found in countless varieties, sizes, and types, and in all environments. 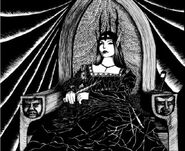