Every Exquisite Thing is the second short story in Ghosts of the Shadow Market, co-written by Cassandra Clare and Maureen Johnson.

Anna Lightwood, eldest child of Gabriel and Cecily, is mad, bad, and dangerously dapper. Every rake has an origin story, though: now under Brother Zachariah's eye we see Anna's doomed love story unfold.[1]

Anna Lightwood tries on her brother Christopher Lightwood's clothes, finding them more to her liking than her own. On a call from her mother, she hastily changes back into her own clothes.

Anna then accompanies her parents, Cecily and Gabriel Lightwood to dinner with Maurice Bridgestock's family. There she meets Ariadne Bridgestock and finds herself enthralled by her beauty. Ariadne shows Anna to the library, where she compliments Anna on the beauty of her blue eyes rather than showing her books.

Anna goes to a meeting with her cousins, James, Lucie, Thomas, and Matthew Fairchild along with her brother. Matthew also tells her of a Downworlder club in Soho, which they visit that night.

A week later, Ariadne arrives at Anna's doorstep and asks her to transport her to the Institute so they can train together. Anna guides Ariadne in blade-throwing and catches her when she falls from the ceiling beam.

That evening, the pair go on an adventure to a Downworlder location where they find the warlock Leopolda Stain surrounded by mundanes, summoning a demon. They attempt to free the mundanes but find themselves attacked by a cluster of Ravener demons. Brother Zachariah arrives at the scene and aids them in fighting the demons; Anna is injured. Ariadne takes her home, heals her wounds, and asks her to stay the night; she and Anna share a long and heartfelt kiss.

Brother Zachariah makes his way to an empty shop where Woolsey Scott's werewolves have held Leopolda hostage. He interrogates her on the identity of Tessa's father, wishing to understand the implications of this heritage on Tessa's children. Rather than accepting her Shadowhunter-blood-for-information proposal, he threatens to kill her. She tells him Tessa's father was an Eidolon Greater Demon, a Prince of Hell, refusing to give his name. She attempts to attack Jem, and the werewolves kill her.

Anna slips home at dawn. At noon, she arrives at Ariadne's house to discover that the Bridgestocks hope for Ariadne to be married to Charles Fairchild in a few years. Ariadne tells Anna that though she is in love with her, she would choose to marry Charles; she wishes to become a mother one day and does not wish to be disowned by her family for loving a woman. Ariadne proposes that they enjoy their forbidden relationship for the next year before Charles returns from Paris before she must be faithful to him. Anna leaves, heartbroken.

Back home, Cecily tells Anna she accepts her for who she is, and that she can spend her life with another woman even though marriage is forbidden; she tells her she can always adopt a Shadowhunter orphan one day should she wish to do so. Anna receives a new suit and cuts her hair short. Her parents accept her, Gabriel boasting that he chose the suit for her and that it matches her eyes. Cecily returns from grabbing something and presents Anna with the Lightwood family necklace. Anna graciously adds it to her attire deciding that she can wear men's clothing and women's clothing as it suits her as a "gentlewoman". 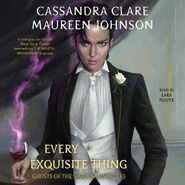