City of Ashes is the second novel in the The Mortal Instruments series by Cassandra Clare.

Clary Fray just wishes that her life would go back to normal. But what's normal when you're a demon-slaying Shadowhunter, your mother is in a magically induced coma, and you can suddenly see Downworlders like werewolves, vampires and faeries? If Clary left the world of the Shadowhunters behind, it would mean more time with her best friend, Simon, who's becoming more than a friend. But the Shadowhunting world isn't ready to let her go—especially her handsome, infuriating, newfound brother, Jace. And Clary's only chance to help her mother is to track down rogue Shadowhunter Valentine, who is probably insane, certainly evil—and also her father.

To complicate matters, someone in New York City is murdering Downworlder children. Is Valentine behind the killings—and if he is, what is he trying to do? When the second of the Mortal Instruments, the Soul-Sword, is stolen, the terrifying Inquisitor arrives to investigate and zooms right in on Jace. How can Clary stop Valentine if Jace is willing to betray everything he believes in to help their father?

In this breathtaking sequel to City of Bones, Cassandra Clare lures her readers back into the dark grip of New York City's Downworld, where love is never safe and power becomes the deadliest temptation.

In the penthouse on the 57th floor of the Metropole in Manhattan, a young warlock named Elias is preparing to summon the Greater Demon Agramon for his client, Valentine Morgenstern. Unbeknownst to the boy, Valentine has other plans: after the ritual is successfully performed, the Demon of Fear reads that Elias's own greatest fear is of a demon escaping his pentagram—a fear the demon brings to life before proceeding to kill the warlock, with Valentine remarking that he intends to use the boy's blood. Valentine then speaks to Agramon, telling him that the latter will obey him as he has the Mortal Cup, and Agramon "kneels" to him in allegiance.

Part One: A Season in Hell

Clary Fray's mother still hasn't woken up. Jace, who was kicked out of his home by Maryse Lightwood, goes to the werewolf bar Hunter's Moon. There, he treats the present members of the local werewolf pack with disrespect. The bartender, Freaky Pete, doesn't want his bar getting destroyed so he tells Bat, a werewolf who got into a bit of a fight with Jace to go take a walk and calm down. Later, Bat comes in and announces that he just saw Joseph, a young cub, being killed nearby—unwittingly interrupting Valentine's draining process for his ritual. He spots Jace and asks him for help as a Shadowhunter to investigate the murder, and a further fight breaks out when Jace refuses, saying it isn't his job. The fight is stopped by their pack leader Luke Garroway, who calls Clary for help dealing with Jace, as she's the only one he listens to.

Clary arrives at the bar, bringing along her best friend, Simon Lewis. While waiting for them, Simon meets Maia Roberts, and they immediately hit it off.

The three of them go to the Institute and confront Maryse, who said that the Inquisitor is coming to talk with Jace and she was trying to spare him. When the Inquisitor arrives, Jace is rude to her, and she locks him in the City of Bones as a lesson to make him respect her. After receiving a distress call from the Silent City, Clary, Isabelle and Alec go to save Jace and find that Valentine had come in the night and killed all of the Silent Brothers in order to take the Mortal Sword. Clary uses an Opening rune to blow Jace's cell door off its hinges, and with Alec half-carrying Jace, who can barely stand, they make their way out.

Part Two: The Gates of Hell

When they emerge, the Inquisitor agrees to let Jace stay with Magnus Bane while he recovers. Clary, Jace, Isabelle, Alec, and Simon get an invitation from the Seelie Queen to go to her courts, however Magnus isn't supposed to let Jace leave, so Alec stays in his place. The others go to the Seelie Court. Clary is tricked into tasting the faerie food, and the Seelie Queen tells them that she must stay in Faerie and that only the kiss she most desires can free her. Clary is forced to kiss Jace, but they get lost in the kiss, and Simon, jealous and annoyed, storms off when they leave.

Later, they are at the Institute when Raphael shows up with an almost dead Simon, saying he must either become a vampire or be staked in the heart and die. They bury his dead body and Simon is reborn a vampire. Outside Luke's house, Maia is attacked by a demon. Luke is also attacked by one shortly thereafter. They go after the demons while Jace goes to visit his father on a boat in the river.

The Inquisitor shows up the next morning claiming that Jace was working with Valentine. She planned to threaten Jace's life unless Valentine returned the Mortal Instruments. While she waits for Valentine's reply, she puts Jace in a Malachi Configuration, but he jumps out of it and escapes.

At the river, Clary draws the Fearless rune on Jace. Magnus turns Luke's truck into a boat to get to Valentine's ship, because he has kidnapped Maia and Simon and intends to use them for the Infernal Conversion. Clary is taken by a demon onto the ship and Jace and Luke go after her. Back at the Institute, Valentine's replies that he would rather have the Mortal Instruments and let Jace die, than hand them over and let his son survive. By then, it's too late to get backup from the Clave but the New York Conclave go to fight Valentine. The Inquisitor ends up saving Jace's life after seeing the scar on his shoulder. Jace then goes deeper into the boat, kills Agramon, and gives Simon his blood to save his life after Valentine slit the latter's throat. Clary inscribes a rune on the boat which makes it fall apart and saves those who were fighting the demons from an unwinnable battle. However, Valentine still has the Mortal Instruments. It is later discovered that thanks to Jace's angelic blood in his veins, Simon is now able to withstand sunlight. Jace is welcomed back to the Institute by Maryse.

Clary goes to visit Simon, who tells her he would rather stay friends than risk losing what they have. Clary goes back to Luke's house and asks him to take her to the Institute, where she bumps into Jace, who is leaving to pick up food from Taki's Diner. She accompanies him there. Jace tells her that he will just be her brother from that point on. After this, Clary goes to the hospital to visit her comatose mother, Jocelyn. Here she meets Madeleine, who says that she knew her mother and knows how to wake her up.

Valentine set in motion the next move in his plan: realign the Mortal Sword from seraphic to demonic with the Ritual of Infernal Conversion. With Agramon in his employ, he set out to drain four young Downworlders of their blood.

The Lightwoods return from Idris, along with Inquisitor Herondale, who has a grudge against Valentine and is adamant about trusting Jace, whom they now all know is Valentine's son.

Jace and Clary remain conflicted about their feelings for one another. Clary briefly dates Simon, but the relationship is complicated by Clary's feelings for Jace, and vice versa—something that disturbs them both and try to deny to one another, considering that they now know that they are siblings—which is later made known to the others when the Seelie Queen forces the pair to share the kiss that Clary desires most.

Meanwhile, Simon is Turned into a vampire by Raphael Santiago. Valentine then targets Simon and Maia, a member of Luke's pack, as the vampire and werewolf recipients of his ritual. With rescuing Simon as Clary's priority, Clary and the others go to Valentine's ship, and soon, the Inquisitor comes to her senses and joins the battle against Valentine's army. Simon and Maia are rescued, and with a rune created through her special ability with runes, Clary destroys the ship.

In the end, Simon decides to let Clary go, while Jace is determined to only be Clary's brother. Meanwhile, a woman from Jocelyn's past, Madeleine Bellefleur, finds Clary and tells her that she knows how to wake her mother up. 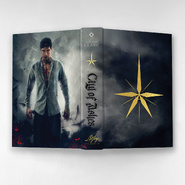 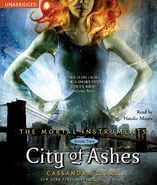 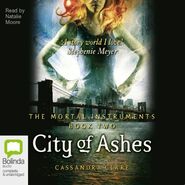 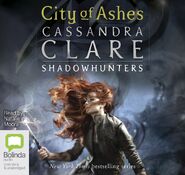