Magnus Bane
Chairman Meow is a cat that belongs to Magnus Bane.

Magnus found him abandoned in an alley near his apartment building with three other kittens, deciding only to keep Chairman Meow while he gave the other three away.[1]

He is a tiny creature that is spooked easily, and Magnus is fond enough of the cat to throw him birthday parties—keeping the promise he once made to always throw birthday parties for his cat.[2] His name is a parody of China's former leader, "Chairman" Mao Zedong. 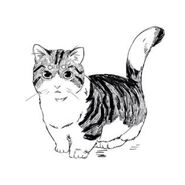 Clary's sketch of Chairman Meow in her copy of the Shadowhunter's Codex.