The Shadowhunters' Wiki
Register
Don't have an account?
Sign In
Advertisement
in: The Last Hours books
English

Chain of Thorns is the upcoming third and final installment in The Last Hours trilogy by Cassandra Clare.

Cordelia Carstairs has lost everything that matters to her. In only a few short weeks, she has seen her father murdered, her plans to become parabatai with her best friend, Lucie, destroyed, and her marriage to James Herondale crumble before her eyes. Even worse, she is now bound to an ancient demon, Lilith, stripping her of her power as a Shadowhunter.

After fleeing to Paris with Matthew Fairchild, Cordelia hopes to forget her sorrows in the city's glittering nightlife. But reality intrudes when shocking news comes from home: Tatiana Blackthorn has escaped the Adamant Citadel, and London is under new threat by the Prince of Hell, Belial.

Cordelia returns to a London riven by chaos and dissent. The long-kept secret that Belial is James and Lucie's grandfather has been revealed by an unexpected enemy, and the Herondales find themselves under suspicion of dealings with demons. Cordelia longs to protect James but is torn between a love for James she has long believed hopeless, and the possibility of a new life with Matthew. Nor can her friends help—ripped apart by their own secrets, they seem destined to face what is coming alone.

For time is short, and Belial's plan is about to crash into the Shadowhunters of London like a deadly wave, one that will separate Cordelia, Lucie, and the Merry Thieves from help of any kind. Left alone in a shadowy London, they must face Belial's deadly army. If Cordelia and her friends are going to save their city—and their families—they will have to muster their courage, swallow their pride, and trust one another again. For if they fail, they may lose everything—even their souls.[2]

For more check either the series' teaser section or the unidentified snippets page.

The word echoed in Cordelia’s ears. Though she had clambered blindly into a fiacre with Matthew, though they were rattling quickly through some part of Paris, she still felt as if she were standing in front of the cabaret, hearing the guard refuse her entrance. I know what I know. You cannot come inside.

Because you are corrupted within, said a small voice inside her. Because you belong to Lilith, Mother of Demons. Because of your own foolishness, you are cursed. No one should be around you.

“Daisy?” Matthew’s worried voice seemed to come from far away. “Daisy, please. Talk to me.”

“Regardless,” said Matthew, “I’m glad to hear that you’ve returned to your usual busy schedule of ruining London’s women for London’s men. Before I left for Paris the buzz was that you had gone entirely out of circulation.”

“It was all anyone seemed to want to talk about at the Ruelle,” Matthew pressed. “Mundane, Downworlders, all the ladies remaining completely unseduced, and not happy about it.”

“I can hardly seduce everyone,” Anna shrugged. “Some of them will just have to seduce one another.”

Now it was Matthew’s turn to raise an eyebrow. “I’m not worried about them,” he said. “I’m worried about you.” In a lower voice he said, “I heard about Ariadne.”

James took a deep breath. “Daisy,” he said. “I wanted to say — I never apologized.”

She turned, laid the striped dress on the bed. Stayed there, fiddling with its buttons. “For what?”

James wasn’t sure how he’d expected Lucie to respond to their arrival, but he was startled nonetheless at the fear that flashed across her face.

"Daisy." Matthew spoke in a low voice, his hand tightening on hers. "I know you are lost in thought. But -- listen."

There was urgency in his voice. Cordelia turned to look behind them, down the long tunnel of the quai -- the river on one side, the stone retaining wall rising on the other, the city above them as if they had retreated underground.

Shhhh. Not the wind in the bare boughs, but a hiss and a slither. A bitter smell, carried on the wind.

Thomas nodded, not really paying attention. It wasn’t his fault, entirely. He knew that Christopher was simply working through his own thought processes aloud, and Thomas wasn’t really expected to follow along. More just produce the occasional encouraging “Oh, indeed.”

From upstairs, the doorbell chimed. Christopher, interrupted in the midst of explaining the science behind fire-messages, put down his stele, muttered about the interruption, and went upstairs to answer the door.

It wasn’t Thomas’s intention to eavesdrop. But when Christopher’s voice drifted down to him, and he heard, “Oh, hullo, Alastair, you must be here to see Charles. I think he’s upstairs in his study,” he found he could focus on nothing else.

Cordelia and Matthew stood, arm in arm, watching the river flow beneath the bridge. The Seine rolled on from here, she knew, piercing the heart of Paris like a silver arrow just as the Thames did London. "We are not here just to forget," Matthew said, "but also to remember, that there are good and beautiful things in this world, always. And mistakes do not take them from us; nothing takes them from us. They are eternal."

She squeezed his gloved hand with her own. "Matthew. Do you listen to yourself? If you believe what you say, remember that it is true for you, too. Nothing can take the good things of the world from you. And that includes how much your friends and family love you, and always will."

“Daisy, I know you think that I’ve never loved you,” James said, “and that therefore you can’t trust my feelings. But I want to show you something.”

“Daisy,” James whispered. “Do you have any idea what it would do to me if something happened to you? Do you?”

"Dear Alastair, why are you so stupid and so frustrating, and why do I think about you all the time?"

Matthew laughed a little breathlessly. “I am saying that with you, I have no armor. I feel everything. For better or worse.”

“Matthew, you must tell James —“

“Tell him what?” said Matthew. “That I love you? He knows that."

"Jesse wanted to chop wood, and Lucie wanted to watch him chopping wood, so it was all working out for the best, really."

Later James could only remember the sound of the wind. A metallic scream, like a knife drawn across a shard of glass, and far below that the sound of howling, desperate and hungry.

He was walking along a long and trackless road: it seemed no one had come before him, for there were no marks on the ground. The sky above was equally blank. James could not have said if it was night or day, winter or summer. Only the bare brown land stretching before him, and the pavement-colored sky above.

We are not here just to forget, but also to remember, that there are good and beautiful things in this world, always. And mistakes do not take them from us; nothing takes them from us. They are eternal.

Matthew's eyes were a very dark green as he looked as Thomas. “You love him?” 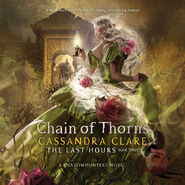