Bitter of Tongue is the seventh short story in Tales from the Shadowhunter Academy, written by Cassandra Clare and Sarah Rees Brennan. It was released on August 18, 2015.

When Simon is kidnapped by the fey, he's amazed to find a friend in former Shadowhunter Mark Blackthorn.

After an Academy mission goes wrong, Simon is kidnapped by faeries, he then uncovers rumors of a secret weapon Sebastian left behind for the faerie queen. He must escape the Fey, relying on his only ally, former Shadowhunter and Dark Artifices character Mark Blackthorn.

Simon Lewis wakes up in his dingy bedroom at the Shadowhunter Academy, and is greeted by his roommate George Lovelace, who complains jovially about the conditions of the room. They make their way to eat breakfast with the other students, and Simon is horrified when Beatriz Mendoza points out that what he thought was porridge, is actually gray eggs.

The students discuss the mission planned for the day, and Simon speaks to George about his feelings on being team leader; as second year students the trainees are allowed to go on actual missions, run by a team leader who gets double points if the mission is successful, and George has been elected for the position. Their mission involves finding faeries who have been slipping through the borders Faerieland and selling mundanes faerie fruit, which can kill them.

Julie Beauvale reminds George of his hesitation in their previous mission, and warns him to take their current one seriously, as she doesn't want to fail. Simon gets up to get juice, and meets Catarina Loss, who he discusses the mission with. She takes note of his good mood, and after she leaves Simon thinks about where he has to be after the mission, which is why he is so happy.

Later, the students all Portal to a moor in Devon where the faeries were last seen, and are given horses by their contact to navigate the uneven ground. They all split up, with Simon and George staying as partners, and comb the moor while staying in earshot of each other. While they search Simon tells George that he's going to Helen Blackthorn and Aline Penhallow's wedding after the mission, as Isabelle's date.

Julie spots a faerie and the group ride after it, straight into a trap. More faeries appear from behind some trees, and Marisol is hit with elfshot. Jon races to protect her, and George gallops after the faerie despite Simon's protests. The faerie runs into a forest and tries to enter Faerieland through a portal, but George grabs it as it passes through and is almost pulled in himself. Simon, knowing the danger of trespassing in Faerieland, manages to cut George off but his horse spooks and runs through the portal. Simon is pulled from the horse by the force of the portal and lands on rocks in Faerieland, losing consciousness.

He wakes up some time later in a cage, and takes a moment to curse at why he is always the one who ends up caged. The faerie George was chasing appears and tells Simon the cage is his. Suddenly another faerie drops from the sky and admonishes the faerie, whom he calls Hefeydd, for getting in the way of the Wild Hunt. He reveals that Simon's horse was eaten by the Hunt's hounds. Hefeyyd hastily explains that Simon is an ascendant Shadowhunter who chased him into Faerieland and so belongs to him now. The faerie, who Simon notes as looking about sixteen, tells Hefeyyd that he won't kill him if he gives up the Shadowhunter. Hefeyyd agrees and runs away, leaving Simon with the faerie, who introduces himself as Mark Blackthorn.

Mark eagerly asks when the others are arriving to help him, and Simon realizes sadly that Mark thinks he has come with other Shadowhunters to save him. He gently explains to Mark that the Clave decided not to help him, and after a brief moment of intense pain Mark recovers and asks after his family.

Simon feels ashamed that he never bothered to learn more about the Blackthorns, and tries to tell Mark what he can, though all he can say is that Helen is getting married, choosing not to reveal Helen's banishment. Mark speaks dreamily of each of his siblings, and launches into a long speech about his time in Faerieland, and how the Shadowhunters have abandoned him despite him sending the message warning them of the faeries.

Suddenly another faerie appears, asking Mark why he's taking so long. The faerie, named Kieran, and Mark have a conversation and Mark leaves with Kieran after the faerie points out that some in the Hunt will not need much of an excuse to punish him. Simon notes the affection between the two, especially Kieran's possessiveness of Mark.

Before Mark leaves he calls Hefeydd back and tells him to give Simon water and not harm him, as he will come back. Mark subtly alerts Simon to a key hanging from Hefeydd's sleeve, before leaving, and Simon manages to obtain the key while pretending to drink water from Hefeydd. He doesn't actually drink, knowing the consequences of consuming food and drink from Faerieland.

Hefeydd leaves, and Simon escapes the cage. He is surprised and happy to see Isabelle approaching through the trees, and they exchange words before entering the cage again, so that Isabelle can "rescue" Simon. While they kiss Hefeydd returns and closes the door, marveling at his luck. He threatens Simon to get Isabelle to discard her weapons and stele, before disappearing. Isabelle is upset at being distracted by Simon, but after expressing her frustration she produces Hefeydd's key and the two make their way into the forest. They come across Mark, who Isabelle immediately recognizes and informs of her disapproval of the Clave's mistreatment of him.

Isabelle, on the spur of the moment, asks Mark to come back with them; he refuses, explaining that the Hunt would only follow him home and he has no wish to see his family hurt. He urges them to go, just as riders from the Hunt arrive. One questions Mark about the two Shadowhunters being in their land, but Mark pins him to a tree with an arrow and states that he sees nothing—and that nothing should go, now. Simon and Isabelle run and Mark, despite the faerie's promise that he will pay, calls out after them to tell his family he loves them.

Upon his return to the Academy Simon is annoyed at the comments the other students make about faeries. He gives them all a lecture on their attitude towards Downworlders, and makes his way to Idris with Isabelle for the wedding. In Idris he spots the Blackthorns and watches them, mulling over Mark's description of each of his siblings and noting the way they all interact. He crosses to Julian and offers to help, but Julian fakes a smile and politely declines; Simon is left to watch him walk away and notes the strain in Julian's body.

After the wedding Simon goes to congratulate Helen and whispers in her ear that Mark sends his love, which makes her smile. He takes a walk down to the lake with Clary and Isabelle, and thinks about how lucky he is. 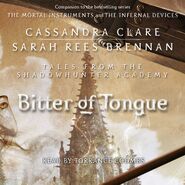